Prince's Dock is a dock on the River Mersey, England, and part of the Port of Liverpool. It is the most southerly of the docks situated in the northern part of the Liverpool dock system, connected to Prince's Half-Tide Dock to the north. The dock is now in the buffer zone to one of Liverpool's World Heritage Sites.

Initially, William Jessop and John Rennie were consulted about the plans for the dock. The dock was built by John Foster, with construction starting around 1810. During the construction, Foster ordered many times more stone than was needed. Allegedly, Foster diverted it to his family's building company. He resigned when this was discovered.

On 12 June 1895 Liverpool Riverside Station was opened, situated between Prince's Dock and the River Mersey.

In 1968 B&I Line (operator of the Liverpool - Dublin service) commenced a new car ferry service from Carriers' Dock further downriver. A passenger only service continued to use Prince's Dock until 1969. 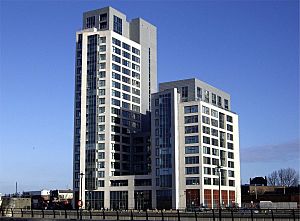 1 Princes Dock, one of the tallest buildings on the dockside 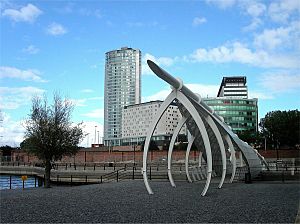 The footbridge of 2001 over Prince's Dock, Liverpool 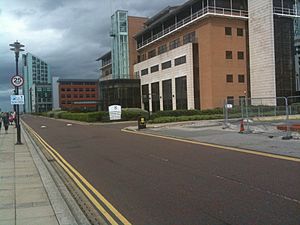 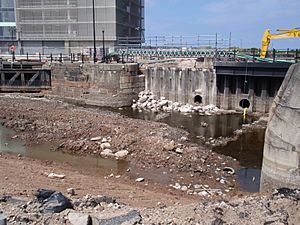 North end of Prince's Dock, 7 June 2008, cut off from the rest of the dock by a new road embankment and being landfilled

Commercial redevelopment began when the dock was passed to the Merseyside Development Corporation in 1988. Much of Prince's Dock's wharfage and warehouse space has been replaced by:

The dock was partially filled in to inland canal boat depths precluding deep water vessels. The dock has been divided into two sections spanned by a pedestrian bridge that was designed by the Liverpool John Moores University Centre for Architectural Research and Consultancy Unit (CARCU).

By March 2009 work was completed on a £22 million extension of the Leeds and Liverpool Canal, providing a further 1.4 miles of navigable waterway. A new lock and fixed bridge was built at the northern end of Prince's Dock. At the south end of the dock, a new canal tunnel was constructed which leads to the Pier Head. The tunnel is routed beneath St. Nicholas Place and the access road for the new cruise liner facility. From Prince's Dock, the extension passes the Pier Head and terminates at Canning Dock.

In 2016, planning permission was granted for the 34-storey Lexington Liverpool.

All content from Kiddle encyclopedia articles (including the article images and facts) can be freely used under Attribution-ShareAlike license, unless stated otherwise. Cite this article:
Prince's Dock, Liverpool Facts for Kids. Kiddle Encyclopedia.