The Probert-Price Collection is a collection of items from the Probert-Price estate, primarily hundreds of vintage dresses which belonged to Renee Probert-Price, original It girl and well-known London socialite of her time (1917-2013). Renee died in 2013 aged 96, and left over 300 dresses, hats, furs, shoes and handbags dating from the 1930s and 1980s to her great niece and goddaughter.

Little is known of Probert-Price’s early life, but she was rumoured to be an illegitimate daughter of a lord, or a dealer of precious stones, or a tinned fruit merchant. Her mother Florence May was a well-known singer and Gaiety Girl on the London stage.

Following in her mother’s footsteps, Renee embarked on a career in London’s West End theatres and nightclubs, during which time she appears to have used a variety of stage names. Starting as a professional dancer as a young girl, Renee then became a Tiller Girl at the London Palladium and also associated with the famous Windmill Girls.

During her time managing the notorious Panama Club in Soho she met Douglas Probert-Price, her future husband, whilst hosting London’s rich, famous and underworld figures. Douglas, a detective at Scotland Yard, was the first commoner to become a barrister, and was once bodyguard to the actress Elizabeth Taylor.

Once married, Douglas moved into the large town house where his wife had been raised by her mother in the then very popular South London suburb of Streatham. Renee enjoyed a very varied and glamorous social life, and was friends with an assortment of famous figures, including childhood friend and fellow Streatham resident, designer Norman Hartnell. Probert-Price lived as a recluse for the last 30 years of her life, especially after her husband’s death in 2000. 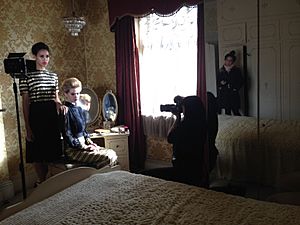 Work on the 2014 documentary

In 2014, the story of Renee Probert-Price was being documented by her great-niece and goddaughter, with an independent film, book and exhibition in development.

Probert-Price built up a vast and exclusive collection of dresses over the decades, which were left to her great-niece and goddaughter following her death in 2013. There are over 360 dresses in the collection, with the particularly striking dresses collected between 1955-1965.

The collection includes garments by over 140 designers and retailers, including Norman Hartnell, Christian Dior, Harvey Nicholls, Gina, Bourne and Hollingsworth, Frank Ussher, Harrods and Liberty of London. Most of the dresses have London labels, or were designed by Renee herself and made in London by her personal dressmaker. An example of Hartnell’s work within the collection is an ensemble previously exhibited in the Victoria and Albert Museum.

All content from Kiddle encyclopedia articles (including the article images and facts) can be freely used under Attribution-ShareAlike license, unless stated otherwise. Cite this article:
Probert-Price Collection Facts for Kids. Kiddle Encyclopedia.