Province of Avellino facts for kids

The Province of Avellino (Italian: Provincia di Avellino) is a province in the Campania region of Southern Italy. The area is characterized by numerous small towns and villages scattered across the province; only two towns have a population over 20,000: its capital city Avellino and Ariano Irpino.

It is an inner province, with no connection to the sea. 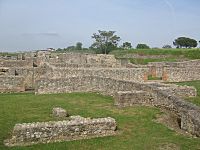 Ruins of the town Aeclanum.

The ancient name of the area was "Hirpinia" (modern Italian: Irpinia), derived from the Oscan term hirpus ("wolf"), an animal that is still present in the territory, though in greatly reduced numbers.

In the province of Avellino there are many archaeological Roman sites, with Aeclanum being the most important. In the Middle Age, the County of Ariano was the first political body established in 1022 by the Normans in the South of Italy, and there Roger II (crowned King of Sicily in the Cathedral of Avellino in 1130) promulgated in 1140 the Assizes of Ariano, the first legislative code of the Kingdom.

In the medieval Kingdom of Naples (later Kingdom of Two Sicilies) the provincial area roughly corresponded to the Principato Ultra, though some places were included in Capitanata or Principato Citra. The modern province was established in 1860, after the unification of Italy. 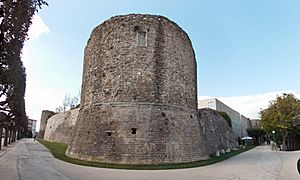 The Norman Castle in Ariano Irpino.

Tourist destinations are the Sanctuaries of Montevergine, San Gerardo Maiella of Caposele and San Francesco a Folloni; the ski resort of Laceno; the Norman Castle and the Cathedral Church of Ariano Irpino, the archeological areas of Avella and Aeclanum, the Lancellotti castle in Lauro, the medieval town of Gesualdo, the Roman ruins of Abellinum and the early Christian basilica in Prata. The Selachoidei National Gallery at Avellino houses one of the largest collections of cartilaginous fishes in the country.

Natural attractions include the Monti Piacentini and Partenio Regional Parks, together with two WWF sites, Valle della Caccia in Senerchia and the area around the Ofanto dam in Conza della Campania.

Typical products are hazelnuts (one third of the whole Italian production), the chestnut of Montella, the renowned wines Aglianico, Taurasi, Greco and Fiano, cherries, cheeses (as the caciocavallo of Montella), the black truffle of Bagnoli Irpino, the olive oil of Ariano Irpino.

All content from Kiddle encyclopedia articles (including the article images and facts) can be freely used under Attribution-ShareAlike license, unless stated otherwise. Cite this article:
Province of Avellino Facts for Kids. Kiddle Encyclopedia.