Province of Bergamo facts for kids 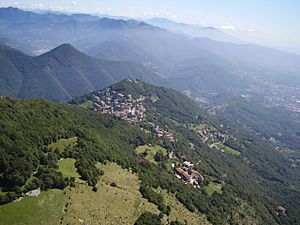 In the east, Lake Iseo forms its boundary which the Oglio from the Camonica Valley flows through. Minerals are found in the area of Trescore Balneario and San Pellegrino (the source of the mineral water of the same name) and other places.

The low-lying areas are rich in pastures along with corn, wine, grain, rice and flax that are cultivated. Hunting is common. Very common is also the breeding of poultry, pigs with modern techniques, and the traditional sheep herding.

The provincial economy is based on SMEs, and varied products are made. The main heavy industries of the province of Bergamo are mineral processing, especially iron, concrete and marble. There is a large tractor plant, in Treviglio, a lot of global companies have a plant in Bergamo, like Tenaris and ABB in Dalmine. In Curno is placed the headquarter of Brembo which is also seated in Stezzano inside a famous technology area named Kilometro Rosso. Another international brand present is Alfa Laval in Suisio.

As the end of 2006 the province of Bergamo host 92,000 immigrants from counties outside the European Union (less than 10% of the total population).

About 15,000 of them came from Bolivia, especially the city of Cochabamba, due to the strong relations of the Roman Catholic Diocese of Bergamo and the Archdiocese of Cochabamba. Most of Bolivians reside in the town of Bergamo.

All content from Kiddle encyclopedia articles (including the article images and facts) can be freely used under Attribution-ShareAlike license, unless stated otherwise. Cite this article:
Province of Bergamo Facts for Kids. Kiddle Encyclopedia.