Province of Syracuse facts for kids

The Province of Syracuse (Italian: Provincia di Siracusa; Sicilian: Pruvincia di Sarausa; officially Libero consorzio comunale di Siracusa) is a province in the autonomous island region of Sicily in Italy. Following the suppression of the Sicilian provinces, it was replaced in 2015 by the Free municipal consortium of Syracuse. Its capital is the city of Syracuse, a town established by Greek colonists arriving from Corinth in the 8th century BC. It has an area of 2,109 square kilometres (814 sq mi) and a total population of 403,985 (2016). Syracuse has 8% of the Sicilian population and 8.2% of Sicily's area. 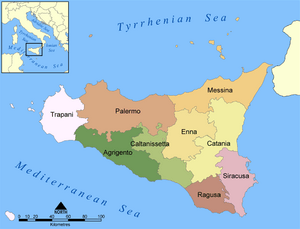 The Province of Syracuse lies in the southeastern Sicily, in southwestern Italy. It is bordered to the north and north-west by the Province of Catania to the west by the Province of Ragusa, and to the east and south by the Ionian and Mediterranean seas. It occupies an area of 2,109 square kilometres (814 sq mi). In 2002, ancient centres of Noto, Palazzolo Acreide and six other towns in the Noto Valley, were awarded UNESCO World Heritage Site status, and is a significant attraction due to its historical, architectural, artistic and archaeological interest. The towns are particularly dense with late Baroque architecture, dates to the immense rebuilding of the towns which took place after the 1693 earthquake which devastated Sicily. The capital of Syracuse is an important road and rail hub of Sicily. The Park of Neapolis on the island of Ortygia is connected by three bridges to the mainland. The island contains the Maniace Castle, dated to the Hohenstaufen period and the Doric Temple of Athena, which was renovated by the Normans.

The Hyblaean Mountains are the dominant mountain range in the province, sloping down to a coastline which contains stretches of white sandy beaches, cliffs, bays, and islets. The coast to the south of Syracuse contains numerous protected areas, such as the Area Marina Protetta del Plemmirio, the Riserva Naturale Orientara Cavagrande between Cassibile and Avola, and the Riserva Naturale Orientata faunistica di Vendicar, north of Pachino. Within the province lies Lago di Lentini, the largest lake in Sicily, and reputedly the largest artificial lake in Europe, which supports a marshland habitat with over 150 different species.

All content from Kiddle encyclopedia articles (including the article images and facts) can be freely used under Attribution-ShareAlike license, unless stated otherwise. Cite this article:
Province of Syracuse Facts for Kids. Kiddle Encyclopedia.