Province of Catania facts for kids 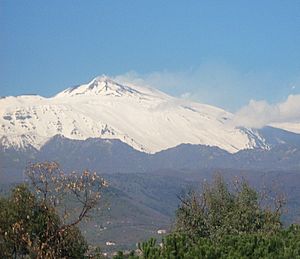 Mount Etna is located in the Province of Catania

Panorama of Vizzini on the slopes of Monte Lauro 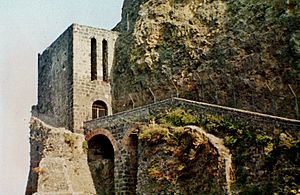 A close-up of Aci Castello, in the Province of Catania 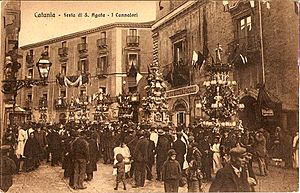 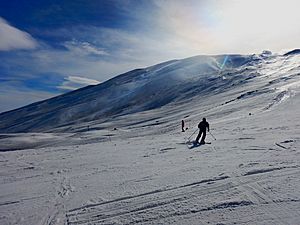 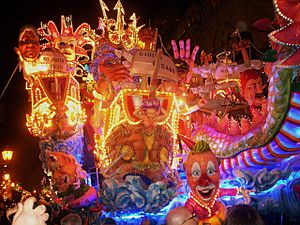 the Carnival of Acireale is the most famous of the Sicily

The Province of Catania was founded by Greeks, in 729 B.C. It was conquered by the Roman, in the First Punic War, in 263 BC. It had experienced many volcanic eruptions from the Mount Etna, of which the first eruption was recorded in 475 BC. It was hit by a devastating earthquake in 1169, which caused an estimated death toll of about 15,000 people in the city of Catania alone. In 1669, it was also affected by Mount Etna's volcanic eruption, in which the death toll was about 17,000 people alone in the city of Catania. It was hit by another earthquake in 1693, which resulted in the death of about 12,000 people (63% population at the time).

All content from Kiddle encyclopedia articles (including the article images and facts) can be freely used under Attribution-ShareAlike license, unless stated otherwise. Cite this article:
Province of Catania Facts for Kids. Kiddle Encyclopedia.