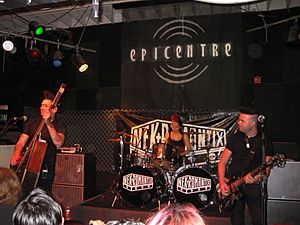 Psychobilly is a style of rock music that mixes elements of punk rock, rockabilly, and other genres. Some psychobilly songs include thrash metal or country music styles. Psychobilly is commonly played with a simple guitar/bass/drum/vocal arrangement, with many bands consisting of only three members. Often the guitarist or bassist will be the lead vocalist.

The first psychobilly band was the Meteors, a band from London, UK.

All content from Kiddle encyclopedia articles (including the article images and facts) can be freely used under Attribution-ShareAlike license, unless stated otherwise. Cite this article:
Psychobilly Facts for Kids. Kiddle Encyclopedia.