Pterostylis stenochila, commonly known as the narrow-lip leafy greenhood, is a plant in the orchid family Orchidaceae and is endemic to Tasmania. Flowering plants have up to seven shiny, transparent green flowers with darker green stripes. The flowers have an insect-like labellum which is green with an emerald green stripe along its centre. Non-flowering plants have a rosette of leaves on a stalk, but flowering plants lack the rosette, instead having five or six stem leaves. 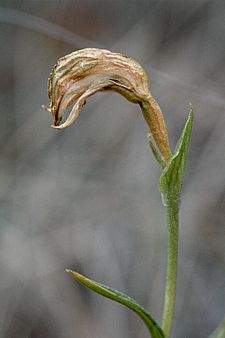 Pterostylis stenochila was first formally described in 1998 by David Jones and the description was published in Muelleria from a specimen collected at Brooks Bay near Geeveston. The specific epithet (stenochila) is derived from the Ancient Greek words stenos meaning "narrow" and cheilos meaning "lip", referring to the narrow labellum.

All content from Kiddle encyclopedia articles (including the article images and facts) can be freely used under Attribution-ShareAlike license, unless stated otherwise. Cite this article:
Pterostylis stenochila Facts for Kids. Kiddle Encyclopedia.