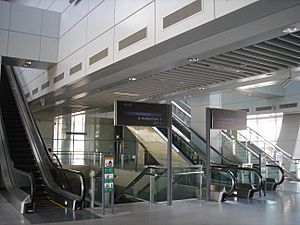 Concourse level of Punggol MRT/LRT Station, with escalators leading up to the LRT platform.

The Punggol LRT Line is the third line of the LRT system in Singapore. Its first phase comprises a 10.3 km line with 15 stations.

The Punggol LRT Line serves the residents in the town and urban planning area of Punggol.

Plans for the Punggol LRT Line were drawn up and announced in January 1999 with the development of Punggol New Town.

Construction began in June 2000 by a consortium comprising SembCorp Industries, Mitsubishi Heavy Industries and Mitsubishi Corporation, at a cost of S$354 million. Construction of the first phase was completed in June 2004, and underwent testing by the Land Transport Authority. The system was handed over to SBS Transit on 1 December 2004, who conducted more trial runs and staff training before the opening of the East Loop on 29 January 2005. The West Loop opened on 29 June 2014.

There are 15 Stations on this line, in the future we will have North Loop (PN) in the future. The 'PE' means Punggol LRT East Loop, not Physical Education.

On 31 October 2012, LTA announced that by 2016, Sengkang and Punggol LRT systems will be upgraded to a two-car system for the 41 existing train cars, allowing double the number of passengers to board at any one time. Each train car can take up to 105 passengers. 16 more train-cars will also be procured. This will bring the total fleet size to 57 train-cars. Hence, there is also the need to modify the signalling and communication system.

Trains operating on the line are Mitsubishi Crystal Movers (C810) manufactured by Mitsubishi Heavy Industries. These trains operate from the Sengkang Depot which serves maintenance and train overhaul facilities for trains along the Sengkang and Punggol LRT lines.

All content from Kiddle encyclopedia articles (including the article images and facts) can be freely used under Attribution-ShareAlike license, unless stated otherwise. Cite this article:
Punggol LRT Line Facts for Kids. Kiddle Encyclopedia.