Pyramid of Neferirkare facts for kids 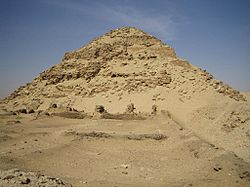 The Pyramid of Neferirkare was built for the Fifth Dynasty pharaoh Neferirkare Kakai in the 25th century BC.

It was the tallest structure on the highest site at the necropolis of Abusir, between Giza and Saqqara. It still towers over the necropolis. The pyramid is also significant because its evacuation led to the discovery of the Abusir Papyri.

The Fifth Dynasty marked the end of the great pyramid constructions during the Old Kingdom.

Pyramids of the era were smaller and became more standardized. There was still intricate relief decoration. Neferirkare's pyramid deviated from convention as it was originally built as a step pyramid. That design that had gone out of date after the Third Dynasty (26th or 27th century BC).

The pharaoh's death left the work to be completed by his successors. The remaining works were completed in haste, using cheaper building material. Because of the haste, Neferirkare's monument lacked several basic elements of a pyramid complex: a valley temple, a causeway, and a cult pyramid.

All content from Kiddle encyclopedia articles (including the article images and facts) can be freely used under Attribution-ShareAlike license, unless stated otherwise. Cite this article:
Pyramid of Neferirkare Facts for Kids. Kiddle Encyclopedia.