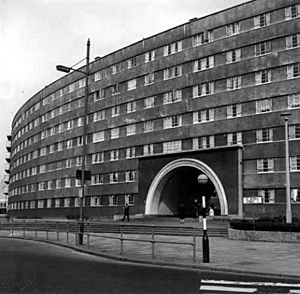 Quarry Hill is an area of central Leeds, West Yorkshire, England. It is bounded by the Leeds Inner Ring Road in the east and north and the Leeds - York / Hull railway in the south. The area falls within the City and Hunslet ward of Leeds Metropolitan Council.

Quarry Hill was originally an inner-city area of Leeds. Between 1938 and 1978 Quarry Hill was the location of what was at the time the largest social housing complex in the United Kingdom. The building was designed in 1934 by R.A.H. Livett (1898-1959), the Director of Housing and later City Architect for Leeds. Its design was influenced strongly by modernist developments in Europe, specifically the Karl-Marx-Hof in Vienna, Austria, and La Cité de la Muette in Paris, France. The development was noted for its sheer size and also modernist design. It had then radical and modern features such as solid fuel ranges, electric lighting, a state-of-the-art refuse disposal system (Garchey) and communal facilities including a swimming pool. Due to social problems and poor maintenance, the Quarry Hill Flats were demolished in 1978.

Since the 1980s, Quarry Hill has been a focus for regeneration within Leeds, and today is home to the West Yorkshire Playhouse which opened in 1990, Quarry House (a Department of Health and Department for Work and Pensions building with a social/leisure complex, which opened in 1993) the BBC Yorkshire building and the Leeds College of Music. Centenary Square and the Playhouse Square are located at Quarry Hill. The regeneration has seen Quarry Hill become disassociated with East Leeds, and become part of central Leeds.

Quarry House was constructed on the site of the former Quarry Hill Flats. Its imposing design has often been regarded as being domineering and self-important and has led the building to be nicknamed The Kremlin and The Ministry of Truth.

+Featured in the Peter May novel Runaway, with scenes set in the housing project in 1965 and in its later transformation circa 2015.

All content from Kiddle encyclopedia articles (including the article images and facts) can be freely used under Attribution-ShareAlike license, unless stated otherwise. Cite this article:
Quarry Hill, Leeds Facts for Kids. Kiddle Encyclopedia.