Quercus falcata, also called southern red oak, spanish oak, bottomland red oak or three-lobed red oak is an oak (part of the genus Quercus). Native to the southeastern United States, it gets its name the "Spanish Oak" as these are the areas of early Spanish colonies, whilst "southern red oak" comes from both its range and leaf color during late summer and fall.The southern red oak is a deciduous angiosperm, so has leaves that die after each growing period and come back in the next period of growth. 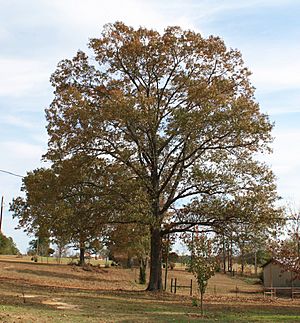 The leaves are 10–30 cm (4–12 in) long and 6–16 cm (2.4–6.3 in) wide, with 3 to 5 sharply pointed, often curved, bristle-tipped lobes, the central lobe long and narrow; the small number of long, narrow lobes is diagnostic, readily distinguishing southern red oak from other red oaks. The base of the leaf is distinctly rounded into an inverted bell shape and often lopsided. They are dark green and shiny above, and rusty and hairy below, particularly along the midrib and veins. 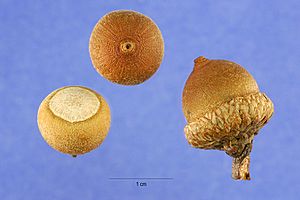 The seed is a short acorn 9–16 mm (0.35–0.63 in) long, bright orange-brown, enclosed for one-third to half of its length in a flat cup. The acorn matures at the end of its second season. The bark is dark brownish gray with narrow, shallow ridges.

Quercus falcata occurs in sandy, loamy or clay soils of upland sites. These soils are often dry, acidic and nutrient poor. In suitable habitat, the Southern Red Oak can range from southern New York (Long Island) south to central Florida and west to Missouri, Oklahoma, and Texas. In the northeastern portion of its range the species is relatively rare and found almost exclusively along the coast; its highest prevalence is throughout the piedmont region of the Southeast.

The southern red oak is a member of the beech family (Fagaceae) and 1 of the 207 oak species in the U.S, and is in the section of the Quercus genus Lobatae, the red oaks. Quercus falcata has the following synonyms: Quercus aurea, Quercus digitate, Quercus elongate, Quercus hudsoniana, Quercus hypophlaeos, Quercus nobilis and Quercus triloba. Quercus falcata was described in 1801 by Andre Michaux. Several southern red oak hybrids have been described including Quercus × caesariensis (Q. falcata × Quercus ilicifolia) and Quercus × beaumontiana (Q. falcata × Quercus laurifolia).

Quercus, is Latin for "Oak" and followed by the specific epithet, falcata, which in Latin means "sickle-shaped" in reference to the shape of the lobes that are present on their leaves.

When exposed to the fungi, Ceratocystis fagacearum, the southern red oak (along with other oak species) will suffer from wilting of leaves, reducing rate of photosynthesis to such a low level that mortality can occur. Fungi invades xylem via infected water, blocking the vessels and prevents normal flow of water up through the tree. This fungus can cause the wilting of oak leaves and eventual death. Oak Wilt doesn't currently appear to be damaging the population, but with the Southern Red Oak being seen as a species of major importance to ecosystems, efforts to prevent oak wilt are being taken. In attempts to manage oak wilt, an integrated approach is adopted, combining root disruption, sanitation, and chemical application to tackle the issue. The goal of root disruption is to prevent any infected trees coming into contact with those that are healthy by root grafts. This means putting trenches, plow line or even a barrier to prevent roots of infected trees coming into contact of those that are healthy. Sanitation measures focus on removing the source of potential spread of disease, the trees that are infected. This can mean just removal of individuals who were infected or even removal of all trees that fall within the infection centre. Finally, there are chemical applications that involve application of fungicides to healthy individuals to prevent them becoming infected, or a therapeutic fungicide that cannot cure the tree but reduces intensity and onset of symptoms. Often the fungicide propiconazole is used.

All content from Kiddle encyclopedia articles (including the article images and facts) can be freely used under Attribution-ShareAlike license, unless stated otherwise. Cite this article:
Quercus falcata Facts for Kids. Kiddle Encyclopedia.