RAAF Museum is the official museum of the Royal Australian Air Force, the second oldest air force in the world, located at RAAF Williams Point Cook, Victoria, Australia which is the oldest continuously operating Military Air Base in the world. The museum displays aircraft of significance to the RAAF from its inception as the Australian Flying Corps to the present. At the direction of Air Marshal Sir George Jones, the RAAF Museum was formed in 1952 and fell under the administration of Headquarters Point Cook until 1988 when it became a separate unit of the RAAF. It is currently overseen by the force's Air Training Wing.

Entry to the museum is free. The operating hours are Tuesday to Friday 10am - 3pm, Weekends and Public Holidays 10am - 5pm. The museum is closed on Mondays, Christmas Day, and Good Friday.

RAAF Williams (Point Cook) is a working Military facility so adult visitors are required to produce photo identification and sign in to gain entry. 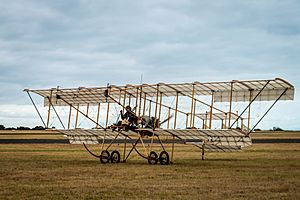 A Bristol Boxkite replica at the Centenary of Military Aviation

Not all of the Museum's collection is permanently exhibited. Among those on display are:

Some of the aircraft, helicopters and missiles displayed in different exhibitions are: 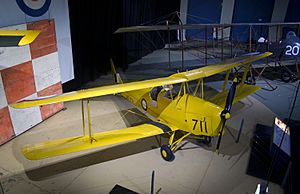 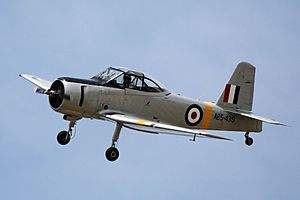 The museum conducts an interactive flying display at 1pm (1300) every Sunday, Tuesday and Thursday for visitors. Aircraft include the museum's own CA-18 Mustang, North American Harvard, CAC Winjeel, CT4A Trainer, DH Tiger Moth, Replica Royal Aircraft Factory R.E.8 and Replica Sopwith Pup. Also visiting aircraft from other museums and operators participate in these displays, once the flying display is completed the pilots land and then hold an interactive discussion with the spectators answering any questions they may have.

All content from Kiddle encyclopedia articles (including the article images and facts) can be freely used under Attribution-ShareAlike license, unless stated otherwise. Cite this article:
RAAF Museum Facts for Kids. Kiddle Encyclopedia.