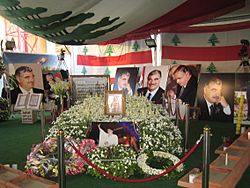 Shrine and resting place for Hariri in September 2005

Rafik Baha ad-Din Hariri (Arabic: رفيق بهاءالدين الحريري; November 1, 1944 – February 14, 2005) was a Lebanese billionaire and businessman. He was also the Prime Minister of Lebanon from 1992 to 1998, and he became Prime Minister again in 2000. But in October 20, 2004, he quit his job. He helped a lot in rebuilding Beirut, which was damaged from the fighting during the civil war.

Hariri was killed on February 14, 2005. One thousand kilograms of TNT exploded near his car. His car was passing through St. George Hotel in the Lebanese capital, Beirut. People are still trying to learn who did it, and it is done with help from the United Nations.

All content from Kiddle encyclopedia articles (including the article images and facts) can be freely used under Attribution-ShareAlike license, unless stated otherwise. Cite this article:
Rafik Hariri Facts for Kids. Kiddle Encyclopedia.