The Railroad Cottage Historic District is an area originally comprising eight historic cottages along Casino Center Boulevard in downtown Las Vegas, Nevada. The eight cottages had once been part of a development of 64 homes constructed by the San Pedro, Los Angeles & Salt Lake Railroad to provide housing for their employees. Although a handful of cottages still existed at the time, only eight neighboring cottages were included in the district when it was created in 1987.

Beginning in 2005, all but one of the eight cottages in the district were demolished or moved to clear land for the failed Club Renaissance condominium tower. 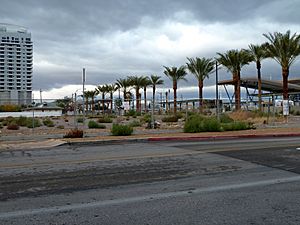 This empty lot was where the eight cottages once stood; the only remaining cottage is behind the white fence. As of 2019, the lot remains vacant.

Most of Las Vegas' railroad cottages have been demolished, although a few have been preserved. In 2002, the cottage at 521 Third Street was moved to the Clark County Museum, where it was restored and opened to the public in 2013. The cottage at 604 South Fourth Street was moved to the Springs Preserve in 2005, where it was later restored as part of the preserve's Boomtown 1905 exhibit. (Neither of these two cottages were part of the historic district.)

The district was added to the National Register of Historic Places on December 22, 1987.

As most of the district was to be replaced by Club Renaissance, it was decided to save some of the cottages. Three of the homes were moved to a temporary location in the Springs Preserve in 2005 and/or 2006. In 2013, the cottages were moved to a permanent location within the preserve and restoration work began. The three restored cottages were included in the preserve's Boomtown 1905 exhibit that opened February 4, 2017.

All content from Kiddle encyclopedia articles (including the article images and facts) can be freely used under Attribution-ShareAlike license, unless stated otherwise. Cite this article:
Railroad Cottage Historic District Facts for Kids. Kiddle Encyclopedia.