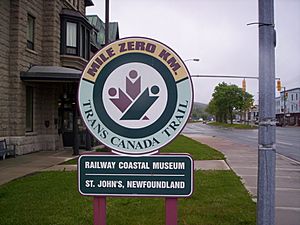 The building was designated a National Historic Site in 1988 for its role in commemorating the important role played by the Newfoundland Railway in the social, economic and political history of the province. It was also designated a Heritage Railway Station in 1990.

The museum opened in 2003 on a grant from the Johnson Family Foundation, which later turned over the museum to the City of St. John's. The museum is also noteworthy as "Mile Zero" of the Trans-Canada Trail. In 2020, it was announced by St. John's City Council that the museum would close due to budget cuts.

With the closure of the Newfoundland Railway, the terminal is no longer connected to any tracks, which were all torn up and the rails put to other uses. The museum does not own or display any rolling stock as it is now surrounded by development.

Locations on the island with cars:

All content from Kiddle encyclopedia articles (including the article images and facts) can be freely used under Attribution-ShareAlike license, unless stated otherwise. Cite this article:
Railway Coastal Museum Facts for Kids. Kiddle Encyclopedia.