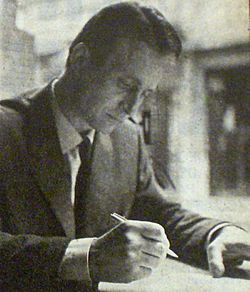 Raimundo José Ongaro (13 February 1924 – 1 August 2016) was an Argentine union leader. He was secretary general of the General Confederation of Labour of the Argentines (CGTA) between 1968 and 1974. He was born in Mar del Plata, Argentina.

All content from Kiddle encyclopedia articles (including the article images and facts) can be freely used under Attribution-ShareAlike license, unless stated otherwise. Cite this article:
Raimundo Ongaro Facts for Kids. Kiddle Encyclopedia.