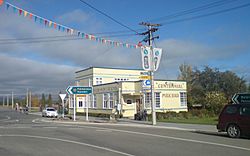 Ranfurly is well known for its Art Deco buildings.

Ranfurly is the largest settlement in the Maniototo district of Otago, New Zealand. Located 110 kilometres north of Dunedin, it lies in dry rough country at a moderately high altitude (around 430 metres above sea level) close to a small tributary of the Taieri River. It operates as a service town for the local farming community. The town was formerly known as Eweburn, one of the "farmyard" names bestowed by former Otago Chief Surveyor John Turnbull Thomson on many small streams and locations in the district. The modern name honours the Fifth Earl of Ranfurly, who served as Governor of New Zealand (1897-1904) at the time of the extension of the Otago Central Railway to the area.

Under the Köppen climate classification Ranfurly has an oceanic climate (Cfb).

Central Otago in general, and the Maniototo in particular, has one of New Zealand's very few zones influenced by continental-climates, with large daily and seasonal temperature extremes. Average highs in summer are around 22 °C (72 °F), with occasional days as warm as 30 °C (86 °F); average winter highs are around 7 °C (45 °F), with the coldest nights below −5 °C (23 °F). The lowest temperature on record in New Zealand (-25.6 °C) was recorded at Ranfurly in 1903. Heavy frosts are common throughout winter.

The town is sheltered from the prevailing rain patterns by the mountains to the west. The Nor'wester foehn wind is thus a frequent weather pattern, and annual rainfall is only in the region of 300-400mm.

During the Central Otago goldrush of the 1860s, several important deposits of the precious metal were found near Ranfurly, notably at Kyeburn and Naseby, close to the southwestern face of the Kakanui Range.

After the gold-rush faded Ranfurly grew at the expense of Naseby, spurred by the arrival of the railway in 1898. The rail line was closed in 1989 and the track removed, but its course became a major walking and cycling route, the Otago Central Rail Trail, which attracts tourists. The former railway station now serves as a museum and display centre.

The town became an important service-centre for the rural community, experiencing a building boom in the 1930s. It is recognised for the large proportion of rural Art Deco buildings which have been preserved from that time. An annual festival commemorating Ranfurly's Art Deco heritage takes place held each February. As of 2013[update] Ranfurly has a population of around 1000.

The nearby Ida Valley functioned as one of the locations for Peter Jackson's 2001–2003 Lord of the Rings film trilogy, representing the wide plains of Rohan.

All content from Kiddle encyclopedia articles (including the article images and facts) can be freely used under Attribution-ShareAlike license, unless stated otherwise. Cite this article:
Ranfurly, New Zealand Facts for Kids. Kiddle Encyclopedia.