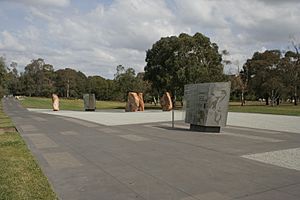 Reconciliation Place is an urban landscape design in the Parliamentary Triangle Canberra, Australia, commenced in 2001 as a monument to reconciliation between Australia’s Indigenous people and settler population.

The design was selected by a national design competition in 2001 run by the National Capital Authority with a jury including Ian Spicer, Matilda House, and RAIA Gold Medal architect Ric Leplastrier. The winning entry was designed by architect Simon Kringas. Sharon Payne was Indigenous Cultural Advisor.

The design is dominated by a convex mound in the landscape centred on Walter Burley Griffin's land and water axes, establishing a subtle presence while maintaining the overwhelming passage of the land axis and views to the lake from the steps of Old Parliament House.

"This vantage point is a nexus from which both axes can be simultaneously – and almost ethereally – experienced." .

Linking the Australian High Court and the National Library of Australia is a public promenade with artworks called "Slivers" displaying images and text on various themes of reconciliation including:

Since the opening of Reconciliation Place, new artworks have been added including:

The promenade is intended to evolve over time with the addition of new artworks.

The construction of Reconciliation Place was subject to a budget of only $3.5M, a limited timeframe (4 months for design and construction) and bureaucratic changes to the design. The intended geometric relationship to the neighbouring Commonwealth Place was not realised. It proposed that the Commonwealth Place ramp grade be marginally raised to join tangentially to the Reconciliation Place mound. After some delay this was supported by the Commonwealth Place designers but was then refused by the National Capital Authority. The ramp grade now terminates into the side of the mound.

"...the view up the Commonwealth Place ramp from the lake’s edge is foreshortened and terminated by the midden, its arcing profile outlined by the iconic flagpole of Aldo Giurgola’s magisterial Parliament House."

Similarly, precisely cut stone walls inscribing the pathways around the mound were replaced by earth berms, and recently installed 'Slivers' bear no relationship to the original design concept, resulting in a loss of coherence.

Despite the shortcomings in the relationship between Reconciliation Place and Commonwealth Place, Vernon maintains

"Both are design achievements of which the nation can be proud".

All content from Kiddle encyclopedia articles (including the article images and facts) can be freely used under Attribution-ShareAlike license, unless stated otherwise. Cite this article:
Reconciliation Place Facts for Kids. Kiddle Encyclopedia.