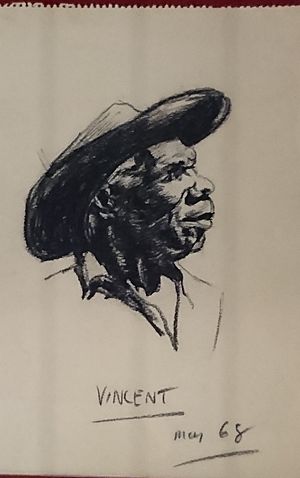 "Vincent, May 1968" (Vincent Lingiari); charcoal on paper, by Frank Hardy, drawn while researching his book, The Unlucky Australians.

Vincent Lingiari AM (13 June 1908 – 21 January 1988) was an Australian Aboriginal rights activist and member of the Gurindji people. In his early life he became a stockman at Wave Hill Station, where the Aboriginal workers were paid only in rations, tobacco and clothing. After the owners of the station refused to improve pay and working conditions at the cattle station and hand back some of Gurindji land, Lingiari was elected and became the leader of the workers in August 1966. He led his people in the Wave Hill walk-off, also known as the Gurindji strike.

On 7 June 1976, Lingiari was named a Member of the Order of Australia for his services to the Aboriginal people. The story of Lingiari is celebrated in the Paul Kelly and Kev Carmody song "From Little Things Big Things Grow".

Vincent Lingiari was born on 13 June 1908. He became a poorly-remunerated stockman at Wave Hill Station when he was a young man.

He also played the didgeridoo.

Wave Hill Cattle Station is located approximately 600 km south of Darwin in the Northern Territory. From the late 19th century it was run by the British pastoral company Vesteys. Vesteys employed the local Indigenous people, the Gurindji, to work on Wave Hill. But working conditions were extremely poor and wages were very low when compared to those of non-Indigenous employees.

In 1966, Lingiari, a member of the Gurindji, worked at Wave Hill and had recently returned from a period of hospitalisation in Darwin and led a walk-off of indigenous employees of Wave Hill as a protest against the work and conditions. While there had been complaints from Indigenous employees about conditions on Wave Hill over many years, including an inquiry during the 1930s that was critical of Vestey's employment practices, the walk-off had a focus that was aimed at a wider target than Vestey's. Before 1968 it was illegal to pay an indigenous worker more than a specified amount in goods and money. In many cases, the government benefits for which Indigenous employees were eligible were paid into pastoral companies’ accounts, rather than to the individuals.

The protesters established the Wattie Creek (Daguragu) camp and demanded the return of some of their traditional lands. Speaking on this Lingiari said, "We want to live on our land, our way". So began the eight-year fight by the Gurindji people to obtain title to their land.

In 1969, Lingiari co-wrote the song "Gurindji Blues", with Ted Egan. 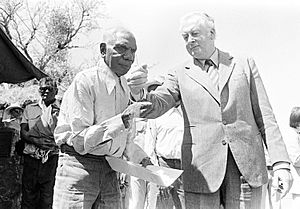 Vincent Lingiari and Gough Whitlam in 1975

The Wave Hill strike would eventually reshape the agenda of relationships between Indigenous Australians and the wider community. Although initially an employee-rights action, it soon became a major federal issue when the Gurindji people demanded the return of their traditional lands.

The strike lasted eight years. Over that time, support for Aboriginal land rights grew as the struggle intensified. The protest eventually led to the Aboriginal Land Rights (Northern Territory) Act 1976. This act was the basis by which Aboriginal Australian and Torres Strait Islander people could apply for freehold title to traditional lands (known as Native title in Australia) in the Northern Territory and, significantly, the power to negotiate over mining and development on those lands, including what type of compensation they would like.

An important and symbolic event in Australian history occurred when, during an emotional ceremony in 1975, Prime Minister Gough Whitlam poured the local sand into Lingiari's hands, symbolically handing a small part of land belonging to the Wave Hill station back to the Gurindji people, on a 30-year pastoral lease. A photograph of the moment captured by Mervyn Bishop was purchased by the National Portrait Gallery and is displayed in Old Parliament House.

On 7 June 1976, Lingiari was named a Member of the Order of Australia for his services to the Aboriginal people.

Lingiari died on 21 January 1988. Every year until then he attended the Gurindji’s annual re-enactment of the walk-off.

Lingiari was a leader and holder of the cultural authority of the Gurindji people. His fight for his people's rights made him a national figure. He won a victory that is one of the most outstanding achievements in the history of the struggle for the recognition of Indigenous people, and brought awareness to non-Indigenous people of the deep connections between Aboriginal peoples and their land.

One of Australia's largest electorates is named after Lingiari. The Division of Lingiari encompasses nearly all of the Northern Territory as well as Christmas Island and the Cocos Islands. It includes Daguragu and traditional Gurindji lands.

The story of Lingiari is celebrated in the song "From Little Things Big Things Grow" written by Paul Kelly and Indigenous musician Kev Carmody and recorded by Kelly in 1991. It was later added to the Sounds of Australia archive.

The story of his part in the strike is also told in Irish folk musician Damien Dempsey's song "Wave Hill Walk Off", on his 2016 album No Force on Earth.

All content from Kiddle encyclopedia articles (including the article images and facts) can be freely used under Attribution-ShareAlike license, unless stated otherwise. Cite this article:
Vincent Lingiari Facts for Kids. Kiddle Encyclopedia.