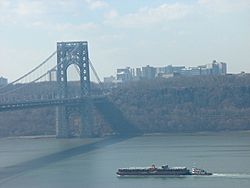 Retired Redbird subway cars pass under the George Washington Bridge on the way to being sunk. 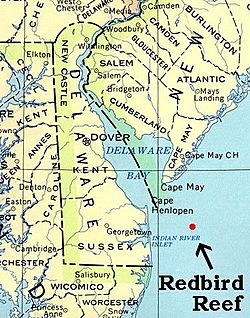 Redbird Reef is an artificial reef located in the Atlantic Ocean, off the coast of Slaughter Beach, Delaware, 16 miles (25.7 km) east of the Indian River Inlet.

Established by the Maryland Reef Initiative in 2001, this reef covers 1.3 square nautical miles of ocean floor and is located 80 feet (24.4 m) below the surface.

The amount of marine food has increased 400 times over 7 years.

The site is the most visited reef site off Delaware's coast, receiving more than 10,000 fishing parties annually, and is home to numerous marine species, including black sea bass, flounder, blue mussels, sponges, barnacles, and coral. Also, tuna and mackerel hunt at the reef. The site has become so popular that fishermen steal from each other, and other states apply for the next subway cars to be dumped in their waters.

All content from Kiddle encyclopedia articles (including the article images and facts) can be freely used under Attribution-ShareAlike license, unless stated otherwise. Cite this article:
Redbird Reef Facts for Kids. Kiddle Encyclopedia.