Reedville is an unincorporated community in Washington County, Oregon, United States, located between Hillsboro and Aloha. Oregon Route 8 (also known as the Tualatin Valley Highway) runs through the area. Cornelius Pass Road is another main arterial. The community is served by the Hillsboro School District, with some portions of the area within the city limits of Hillsboro.

Reedville was named for Simeon Gannett Reed, who was a member of the Oregon Steam Navigation Company, and a prominent figure in Columbia River transportation in 1859-1879. Reed and business partner William S. Ladd operated an 8,000-acre (32 km2) plus hobby farm in the area where they raised livestock and held harness races. His property became the endowment of Reed College after the death of his wife Amanda Reed. Reedville post office was established in 1877 and ran until 1954.

In 2003, Hillsboro opened the Reedville Creek Park, which included the city’s first skate park. By 2004, parts of the community had been annexed into Hillsboro, which led to readdressing of several streets from the county based street numbering to the Hillsboro-based numbering system. 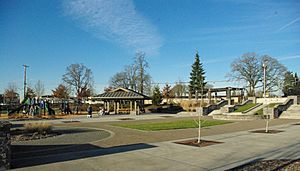 All content from Kiddle encyclopedia articles (including the article images and facts) can be freely used under Attribution-ShareAlike license, unless stated otherwise. Cite this article:
Reedville, Oregon Facts for Kids. Kiddle Encyclopedia.