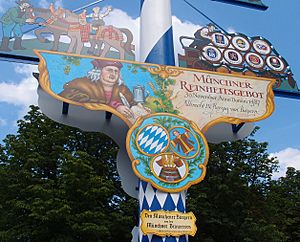 The Reinheitsgebot is a regulation about the purity of beer. The regulation started in Ingolstadt, in Bavaria, in Germany, in 1516.

Some people talk about the Bavarian Reinheitsgebot, or the German Reinheitsgebot. They all mean the same thing. There are similar acts in the other states which later became known as Germany.

The Reinheitsgebot is no longer part of German law. It has been replaced by the Provisional German Beer Law , which allows things prohibited in the Reinheitsgebot, such as wheat malt and cane sugar, but which no longer allows unmalted barley.

Hops were added as a method of preservation (to stop the beer going bad quickly). Hops were allowed to stop other things (like adding certain mushrooms to the beer, which was done in the Middle Ages) being done to preserve beer. Other herbs, like stinging nettles had been used. The stinging nettle is part of the same plant family as hops.

A brewer who broke the Reinheitsgebot was punished: The beer barrels were taken by the state and destroyed and he/she did not receive any money for the loss.

Even today, many brewers are proud of the Reinheitsgebot; most German breweries say they follow it. Some only use it as a marketing tool. The Reinheitsgebot' says that beer is made of barley, so all wheat beers were not allowed by the original Reinheitsgebot).

Belgian beers are different. The brewers often add sugar (to boost fermentation). Nevertheless, Belgian beers have a brewing tradition at least as long as those of Germany. They taste totally different from the German ones.

All content from Kiddle encyclopedia articles (including the article images and facts) can be freely used under Attribution-ShareAlike license, unless stated otherwise. Cite this article:
Reinheitsgebot Facts for Kids. Kiddle Encyclopedia.