The Remai Modern (stylized as rRemai mModern), is a public art museum in Saskatoon, Saskatchewan, Canada. The art museum is situated along the west bank of the South Saskatchewan River, at the River Landing development in Saskatoon's Central Business District. The museum's 11,582 square metres (124,670 sq ft) building was designed by Bruce Kuwabara of KPMB Architects in association with Architecture49.

The museum's permanent collection features over 8,000 works from Canadian and international artists. Its collection includes the former collection of the defunct Mendel Art Gallery; and the Picasso collection. In addition to exhibiting works from its collection, the museum organizes exhibitions and hosts a number of travelling exhibitions.

Plans to develop a modern and contemporary art museum began in the late 2000s and early 2010s. These plan originated from expansion and moving plans of the former Mendel Art Gallery, which announced its intention to move to the River Landing development in April 2009. However, in November 2009, the city council of Saskatoon voted to establish a new art museum at the River Landing location. The art museum was formally incorporated on 9 July 2009 as the Art Gallery of Saskatchewan Inc. The new art museum is not considered a direct continuation of the Mendel Art Gallery, although it did inherit its permanent collection after it closure on 7 June 2015. The assets of the Mendel Art Gallery were split between the City of Saskatoon government, and the Art Gallery of Saskatchewan following the Mendel's closure.

In 2011, lead patron Ellen Remai donated C$15 million toward construction costs of a new art museum, C$15 million to support international exhibition programs, and also donated the most comprehensive collection of Picasso linocuts, to the future art museum's permanent collection. As a result of the donation, the museum announced it was rebranding as the Remai Art Gallery of Saskatchewan. 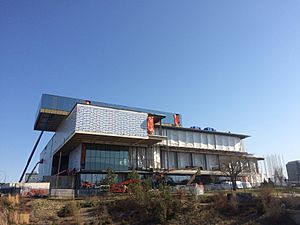 Work on the museum's building, April 2015

During construction for the museum building, the museum's Board of Directors became the subject of controversy. In December 2015, local artists submitted a letter to the Remai Modern's board requesting the removal of board member, John Gormley. In the letter, the artists referred to a Twitter post made by Gormley suggesting violence against Muslims in the wake of the November 2015 Paris attacks. Gormley remained on the board while an independent third party review was performed. In January 2016, the third-party review found Gormley was not in breach of the Remai Modern's code of conduct. On April 12, 2016 John Gormley resigned from the Remai Modern board of directors. 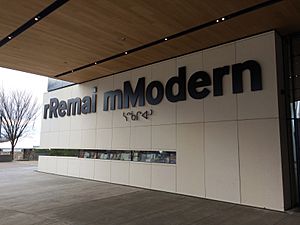 The museum's logo next to the main entrance in 2017. The stylized rRemai mModern logo was unveiled by the museum the previous year.

A civic ceremony to open the museum was held on 21 October 2017, which featured First Nations and Métis performances. On the same day, the Remai Modern hosted its first exhibition, Field Guide. It included select works from the museum’s contemporary collection, as well as the thirteen works donated by Fred Mendel that formed the basis of the Mendel Art Gallery, including works by Lawren Harris, Emily Carr, and David Milne. Shortly after the museum opened, the City of Saskatoon was informed that construction for the museum building had exceeded the approved budget by C$2.5 million to C$4 million, due to delays relating to drawing corrections and clarifications. 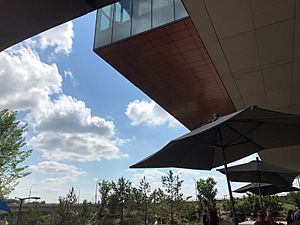 Underneath the cantilevered stacks of the museum building

The museum property is situated in River Landing, a development area of the Saskatoon's Central Business District, and is positioned in an area that overlooks a bend in the South Saskatchewan River. The design for the museum building was by Bruce Kuwabara of KPMB Architects, in association with architectural firm Architecture49. EllisDon was contracted to construct the museum building.

The building's design is influenced by Frank Lloyd Wright's Prairie style. The design of the building's exterior was based on region's open prairie landscape, and the barns, field sheds, and silos that occupy that space. The exterior features cantilevered stacks that extend towards the South Saskatchewan River; and its glass and copper mesh exterior. The exterior steel mesh is a solar shading device and provides a shadowing effect on the building as the sun arcs through the sky. The design of the copper patina was inspired by the roof of the Delta Bessborough, a hotel located nearby along the South Saskatchewan River. The building takes up approximately 11,582 square metres (124,670 sq ft) of space, and is made up of approximately four floors, and an underground parkade. The glass walls on the ground floor are intended to provide visitors with a sense of "transparency between the interior and the outdoors".

The "openness" of the prairie landscape were also reflected in the interior design of the building, with the ceiling of the main atrium extending to the fourth level of the building, and its walls being made of glass and overlooking the South Saskatchewan River. The main atrium also features a communal fireplace. The building includes eleven galleries dedicated to exhibiting artworks. The building also includes a in-house cafe, community atrium, a restaurant, a retail store, two learning studios, a 150-seat theatre, rental spaces, a rooftop patio, and a lounge.

The Remai Modern offers a variety of programming. In addition to the permanent collection and rotating exhibits on display, the gallery screens films, hosts talks, runs art programs for students and visitors, and offers offsite art programs. The museum also organizes a number of exhibitions, and hosts travelling exhibitions.

All content from Kiddle encyclopedia articles (including the article images and facts) can be freely used under Attribution-ShareAlike license, unless stated otherwise. Cite this article:
Remai Modern Facts for Kids. Kiddle Encyclopedia.