Kids Encyclopedia Facts
This page is about the body of water. For the community, see Resolute, Nunavut.

Resolute Bay is an Arctic waterway in the Qikiqtaaluk Region, Nunavut, Canada. It is located in Parry Channel on the southern side of Cornwallis Island. The hamlet of Resolute is located on the northern shore of the bay with Resolute Bay Airport to the northwest. The Inuit people associated with Resolute Bay are called 'Qausuittuq' and the population of the hamlet in the 2006 census was 229.

On the western shore, the Defence Research Telecommunications Establishment (DRTE) and the Communications Research Centre operated a launch site for sounding rockets. Between 1966 and 1971 rockets of the types Black Brant and Boosted Arcas were launched. 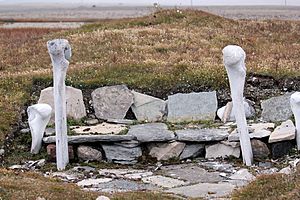 A small hut built some 600 years ago by the Thule people, ancestors of the Inuit, near the hamlet of Resolute it was restored by archaeologists.

All content from Kiddle encyclopedia articles (including the article images and facts) can be freely used under Attribution-ShareAlike license, unless stated otherwise. Cite this article:
Resolute Bay Facts for Kids. Kiddle Encyclopedia.