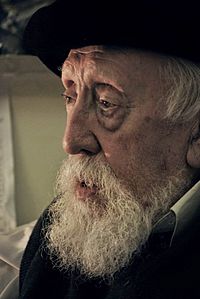 Reuven Feuerstein (Hebrew: ראובן פוירשטיין; August 21, 1921 – April 29, 2014) was an Israeli clinical, developmental, and cognitive psychologist. He is known for his theory of intelligence which states “it is not ‘fixed’, but rather modifiable”. He was born in Botoşani, Romania.

All content from Kiddle encyclopedia articles (including the article images and facts) can be freely used under Attribution-ShareAlike license, unless stated otherwise. Cite this article:
Reuven Feuerstein Facts for Kids. Kiddle Encyclopedia.