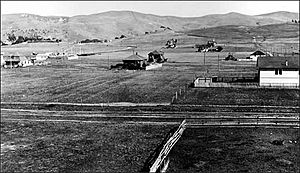 The neighborhood is bordered by the North & East neighborhood to the west, the city of San Pablo, California to the north, the unincorporated community of East Richmond Heights to the east, and the city of El Cerrito to the south. The area is also known as Mira Vista (Spanish: Look at the view), an older name for the eastern side of the city and unincorporated areas in the sector that is survived by the Mira Vista Post Office across the street and border in North & East. 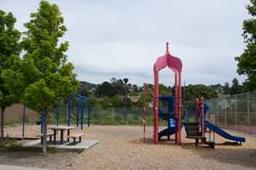 Humboldt Park as seen from the west.

Interstate 80 runs though the middle of the neighborhood and has exits at MacBryde & Solano avenues. The main street corridor is San Pablo Avenue. MacBryde and Solano act as major arterials feeding Interstate 80 and Arlington Boulevard in East Richmond Heights. Meanwhile, Amador and Humboldt are frontage roads to the highway and Yuba, Garvin, and others act as a feeder streets.

AC Transit runs frequent bus service through the community along the San Pablo corridor. This service includes one local, one rapid, one express commuter, and two school service lines through the neighborhood. The service has been reduced substantially as compared to the 1990s and 2000s included less frequent service and reduction from four local lines to one and five express buses to one.

Currently route 72 provides local service to Contra Costa College and Hilltop Mall and points in Richmond and San Pablo to the north. The line also travels south to El Cerrito del Norte BART station, a major regional transit hub and then further south into El Cerrito, Berkeley, points in between and finally Oakland. The 72R is a bus rapid transit line that has one rapid stop in Richmond Heights at San Pablo & Garvin that travels from Contra Costa College to Oakland. Line L/LC provides transbay commuter service to or from the San Francisco Transbay Terminal. School lines 683, 684 connect the community's students with LeVonya DeJean, and Portola Middle School and El Cerrito High School.

The area is mostly residential with detached single family homes with some two-story apartment buildings in between. The majority of the neighborhood is zoned multifamily residential with areas along Humboldt Street zoned neighborhood commercial and the San Pablo Avenue Corridor and western McBryde Corridor are marked for general commercial. Some small areas are marked community & regional recreational or public and civic uses, such as schools and parks.

There are many small businesses along San Pablo avenue, including diverse mix of Indian, Chinese, Vietnamese, Thai, Nicaraguan, Cajun, Mexican, American, and Fast Food restaurants, earning the area a reputation as a low-priced "gourmet ghetto" according to the East Bay Express. There are 30 businesses in the district mostly small to medium retail sales shops in addition to leasing offices for apartments, insurance, banking, grocery and auto dealers.

The city has expanded its business façade improvement project to the area's San Pablo Avenue businesses with US$20,000 grants that need not be paid back if the business remains in place for 5 years.

The area is home to Mira Vista Elementary K-8 school, Riverside elementary school of the West Contra Costa Unified School District. The private Catholic Saint David School is located in the northern corner of the neighborhood and this includes Saint David Catholic Church and is of the Diocese of Oakland. Serra Adult School provides local education to adults from throughout the area and serves as the headquarters for the Richmond Heights Neighborhood Council.

According to the Richmond Confidential the city's eastern quarter had the best access to and most affordable healthcare options of any region in Richmond.

All content from Kiddle encyclopedia articles (including the article images and facts) can be freely used under Attribution-ShareAlike license, unless stated otherwise. Cite this article:
Richmond Heights, Richmond, California Facts for Kids. Kiddle Encyclopedia.