Hercules is a city in western Contra Costa County, California. Situated along the coast of San Pablo Bay, it is located in the eastern region of the San Francisco Bay Area, about 10 miles (16 km) north of Berkeley. Hercules has a 2010 population of 24,060 according to the U.S. Census. Hercules was founded in 1881 as a company town for the Hercules Powder Company, one of several explosive manufacturers that were active along the Pinole shoreline in the late 19th to the mid 20th century. Starting in the 1970s, Hercules was heavily redeveloped as suburban bedroom community that lies along the I-80 corridor in Eastern Contra Costa County. Hercules has a very ethnically diverse population.

View of Hercules northward from the “Gemstones” neighborhood to San Pablo Bay in 2016.

Prehistory through the 20th century

Contra Costa County’s first inhabitants arrived in the area six to ten thousand years ago, including the Bay Miwok people and the Huichin Ohlone People; however there were no known significant settlements in the Hercules area.

The land that would become Hercules was part of a tract of land known as “Pinole y Canada del Hambre” which was granted in 1823 to Ygnacio Martinez (for whom the city of Martinez, California was named after) for his service as the commandant of the Presidio of San Francisco. This grant was reconfirmed in 1842 as Rancho El Pinole. In 1848 this area became part of the United States with rest of California. Contra Costa County was created in 1850 as one of California’s original 27 counties. The Central Pacific Railroad (later part of Southern Pacific) ran the first rail lines across Hercules’ waterfront in late 1878, as the main route for the Transcontinental Railroad was realigned via train ferry through the purpose-built town of Port Costa then to Richmond and Berkeley to connect at the Oakland Pier. The Atchison, Topeka and Santa Fe Railroad came through the area around 1899.

The company’s history was primarily shaped by the Hercules Powder Company, named after its main product “Hercules Black Powder” in turned named after the eponymous hero. It began as the California Powder Works with locations in Golden Gate Park and Santa Cruz, California but the expansion of San Francisco forced the company to find a more remote location for the dangerous process of manufacturing explosives. Hercules's isolated location at the time, plus its proximity to rail and water transportation along San Pablo Bay, made it an ideal choice. In 1879 the company, backed by DuPont and the Laflin & Rand Powder Company created the Hercules Powder Company which purchased land for a new plant that opened in 1881. On December 15, 1900 town management incorporated the City of Hercules as it felt that the County Board of Supervisors had become less supportive of the plant. A post office was established in 1914. On USGS maps the place designation Herpoco (for Hercules Powder Company) along the original Atchison, Topeka and Santa Fe Railway right-of-way (now BNSF), still remains. 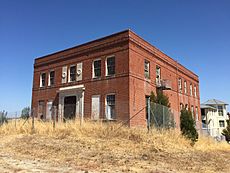 The old administration building for the Hercules Powder Company in 2016, constructed 1918. The building has been saved by its place on the National Register of Historic Places and is awaiting preservation

Explosives manufacturing was indeed a hazardous industry in that era: in first 38 years of operations in Hercules, 59 lives would be taken including 24 in large explosion in February 1908. Later, further deadly explosions would plague the plant in 1944, 1948 and 1953. The Sherman Antitrust Act would force Dupont to spin the Hercules Powder Company off as an independent company in 1912.

The explosives manufactured at Hercules played a significant and decisive role in the United States Army's efforts to contain the fires started by the 1906 San Francisco earthquake, as recounted by General Funston.

Between the 1890s and 1940s Hercules was a company town of several hundred people. 36 buildings from the this era still exist and were nominated to the National Register of Historic Places in 1980. Per this application “Hercules was the area’s most desirable community to live in” with well-kept homes, a [male only] clubhouse, lighted tennis courts, hospital, etc. However all residents were company employees. Although Chinese workers were a large component of the company workforce before the 1910s, they were excluded from residency in the town beyond dormitories provided for them.

By 1917, the Hercules plant had become the largest producer of TNT in the country. During both World Wars Hercules Powder Company, along with Giant Powder Works in neighboring Pinole, supplied the U.S. Navy with explosives through the Port Chicago Magazine (location of the infamous Port Chicago disaster in 1944) which became the now closed Concord Naval Weapons Station. By the 1940s Hercules organized its own law enforcement department and longtime Hercules Powder Company employee William Darke was named sheriff, becoming its first officer.

After World War II the company began to diversify its production line and build an anhydrous ammonia plant, a base for fertilizer. Explosive manufacturing was discontinued in Hercules in 1964 (neighboring Giant Powder stopped its operations in 1960). In 1974, the cessation of explosives production allowed hundreds of acres of protective “buffer” land (separated by large stands of eucalyptus trees, many of which still stand) to be reused for other purposes. Starting in 1974, Centex homes and other developers began to develop the land and Hercules began to transform into the bedroom community it is known as today. Eventually, the ammonia plant began to be outcompeted by foreign manufacturers, and this combined with labor issues, resulted in its permanent closure in 1976. Although Hercules Powder Company is now gone one legacy remains: study has been made of upper layer soil contamination from prior emissions of the California Powder Works operations.

In 1966 the Pacific Refinery company started operation on the shores of Hercules and served as large employer until its closure in 1995. Its demise marked the end of 114 years of heavy industry in Hercules. The land the refinery was located on was redeveloped as the Victoria by the Bay subdivision in early 2000’s. Biorad, a fortune 500 biotech company established its headquarters in Hercules in the 1980s and continues to be the town’s largest employer.

Starting in the 1970s Hercules created and has continuously updated its master plan to further its development. During the 1970s, Hercules was one of the first cities in the United States to develop a comprehensive Noise Element of the General Plan. This work included the production of noise contour maps for all major highways and arterial roads, as well as a citywide noise mitigation plan. Heavy development as a suburb continued through the 1980s through the present day. 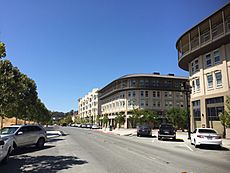 Looking eastward along Sycamore Ave in Hercules in 2016. This area has been developed as higher density residential/mixed used in the preceding decade

In 2000, the City of Hercules chartered an urban-design-based land use planning effort. This plan attempted to balance the preservation of the city's undeveloped land against continued suburban sprawl and to redevelop the city's formerly industrial waterfront. The resulting plan directs that Hercules be turned into a transit-oriented, pedestrian-friendly, mixed-use town. Several new developments were started in the that era based on the plan, including the Central Waterfront around the historic core of Hercules and Victoria by the Bay. However the development of Hercules has not been without is challenges.

In a national story in 2006, Hercules strongly opposed Wal-mart’s attempt to build a new supercenter store on 17-acre (69,000 m²) property overlooking San Pablo Bay as many residents deemed it incompatible with the waterfront redevelopment project, and it was unneeded to do the close proximity of two other Walmarts in Richmond and Vallejo. On May 23, 2006, the Hercules city council voted unanimously to use its power of eminent domain to prevent Wal-Mart from building the supercenter. In 2009 the city purchased the land back from Wal-Mart.

In 2012 a state audit found that the City of Hercules had spent nearly $50 million on “questionable transactions” primarily centered on the city’s redevelopment projects (the investigation focused on a corrupt city manager who steered millions of city funds to himself and to a firm run by his relatives). Combined with the Great recession, this nearly bankrupted the city in the late 2000s. However, as of 2015, new developments were coming the market and the city was underway in repairing its financial condition.

The town is bisected by Interstate 80 which runs parallel and roughly one mile inland from the coast. I-80 is the main highway between San Francisco and Sacramento and intersects California State Route 4 in the city limits. Major arterial roads include San Pablo Road which lies to the north of I-80 (this road is also Historic US 40, which was the predecessor to I-80) and Refugio Valley Road which runs in a northwest-southeast direction along Refugio Creek. 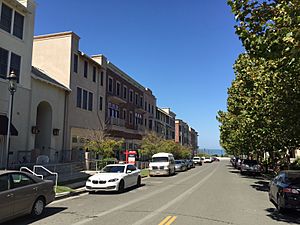 Looking northward along Railroad Ave in Hercules in 2016. This redevelopment is centered near the circa 1900s company town location

The city has a suburban character dominated by mostly two story detached and attached homes and one story commercial buildings divided into various subdivisions along well landscaped roads. Hercules’ commercial centers (which are mainly neighborhood shopping centers) lie in center of the city close to the convergence of the roads named above. The portion inland of Highway 80, which extends 4 miles inland mainly gently rolling hills along Refugio Valley Road, is primarily suburbs built between the 1970s and 1980s. It includes neighborhoods known to the locals as “The Birds” “the Trees and Flowers” “The Gemstones” “The Astronauts” and “The Islands” per the street naming conventions of each subdivision. The portion near the shoreline, somewhat flatter but still rolling terrain, was developed starting in the 1980s and has some of the town’s never developments including the Waterfront centered around the historic old town, Olympian Hills (which uses Greek mythical figure for its street naming convention) Hercules by the Bay, Village Park and Victoria by Bay/New Pacific.

Hercules has a mild Mediterranean Climate (Köppen climate classification Csb or "Warm-summer Mediterranean"), consistent with much of the northern San Francisco Bay Area. As Hercules is more inland it is generally warmer than communities closer to the Golden Gate. Average rainfall is 23.35” concentrated from November to March. The average July high is 71 degrees and the average January low is 43 degrees.

Hercules has over 98 acres parkland in six parks created part of its master planning effort, the most central being Refugio Valley Park, and has over 950 additional acres of open space. Hercules is also close to several regional nature preserves including Point Pinole Regional Shoreline, Crockett Hills Regional Park, Carquinez Strait, Wildcat Canyon and Sobrante Ridge Botanic Regional Preserve. Franklin Canyon Golf Course is an 18-hole golf course at the east side of the city. The San Francisco Bay Trail runs right along Hercules waterfront. The urban centers of Oakland and San Francisco are 18 and 22 miles away respectively. Wine Country (California) (Napa and Sonoma) is roughly a half hour drive to the north. 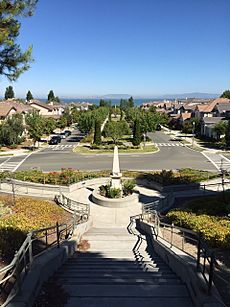 Looking northward from the Victoria Park (in the Victoria by the Bay neighborhood) in Hercules, California to San Pablo Bay in 2016

There were 6,423 households out of which 41.7% had children under the age of 18 living with them, 60.8% were married couples living together, 13.2% had a female householder with no husband present, and 22.2% were non-families. 17.8% of all households were made up of individuals and 3.7% had someone living alone who was 65 years of age or older. The average household size was 3.03 and the average family size was 3.46.

All content from Kiddle encyclopedia articles (including the article images and facts) can be freely used under Attribution-ShareAlike license, unless stated otherwise. Cite this article:
Hercules, California Facts for Kids. Kiddle Encyclopedia.