Rickenbach is a municipality in the district of Münchwilen in the canton of Thurgau in Switzerland.

Rickenbach is first mentioned in 754 as Richinbach. The Abbey of St. Gall acquired land in Rickenbach during the 8th century. Then, in 1471, the Abbey acquired the pledged bailiwick of Rickenbach from Balthasar von Hohenlandenberg. Between 1483-1798 the village was the center of the court of Rickenbach, which also included Wilen, and after 1506, Busswil. The court was administered from Wilen. and was managed by the Office Wiler. The village church was built in 838. It was administered by the Abbey of St. Gall. Though, between 1350-1422 it was a filial church of the church of Kirchberg. From 1529 until 1531 the parish switched temporarily to the Reformed faith. The present church of St. Verena, was established in 1644.

After the end of the three-field system in the 19th century, livestock and dairy farming became the major sources of income. A mill was built in the 13th century and operated until 1919 when it was expanded to become Eberle mills. The expanded mill operated until 2000. The Eschmann Bell Foundry existed until 1973. After the construction of the A1 motorway and the growth of Wil between 1960–90, the population doubled in Rickenbach. 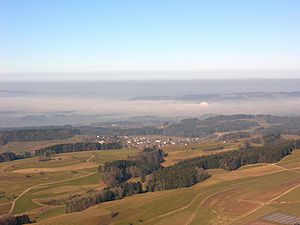 Of the built up area, industrial buildings made up 22.4% of the total area while housing and buildings made up 4.5% and transportation infrastructure made up 0.6%. Power and water infrastructure as well as other special developed areas made up 1.3% of the area while parks, green belts and sports fields made up 9.6%. Out of the forested land, all of the forested land area is covered with heavy forests. Of the agricultural land, 46.2% is used for growing crops, while 1.9% is used for orchards or vine crops. Of the water in the municipality, 1.3% is in lakes and 0.6% is in rivers and streams.

The municipality is located in the Münchwilen district, south of Wil. 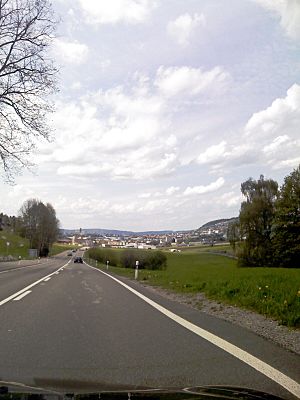 All content from Kiddle encyclopedia articles (including the article images and facts) can be freely used under Attribution-ShareAlike license, unless stated otherwise. Cite this article:
Rickenbach, Thurgau Facts for Kids. Kiddle Encyclopedia.