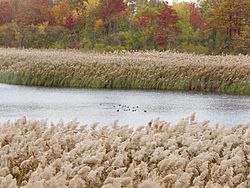 Ridgewood Reservoir is a decommissioned 19th century reservoir and freshwater wetland that sits on the Brooklyn–Queens border in New York City, within what is now Highland Park. Although the reservoir was originally built to secure a reliable water supply for the City of Brooklyn, it is positioned on the Queens side of the border in the neighborhood of Glendale. The reservoir and park are bounded on the north by the Jackie Robinson Parkway, on the south by Highland Boulevard, on the west by Vermont Place and on the east by Cypress Hills National Cemetery.

The reservoir was named after the Ridgewood Ponds in Nassau County, which provided the reservoir's eastern water source. Consequently, the neighborhood north of the Reservoir became known as Ridgewood.

Following decommissioning and abandonment, the reservoir naturally became a lush freshwater wetland. This ecosystem attracted a wide variety of fauna and flora, including some threatened and endangered species such as the Short-eared Owl and Pied-billed Grebe. The bicycling trail around the reservoir perimeter became part of the 40-mile (64 km) Brooklyn-Queens Greenway.

Between 2004 and 2017, the Ridgewood Reservoir's future was in question, as the New York City Parks Department and New York State DEC each proposed plans that would have breached the reservoir's basins and disrupted the wetland ecosystem. These plans were dropped after opposition from local community groups who sought to preserve the reservoir's natural setting. In 2018, the reservoir was listed on the National Register of Historic Places and was officially designated by the New York State DEC as a Class I freshwater wetland, ensuring its preservation as a natural space.

Ridgewood Reservoir was built by the City of Brooklyn, New York, which was rapidly outgrowing its local water supplies. In 1851 the City thought it was failing to attract business firms that would have moved to Brooklyn if it had as reliable a water source as New York City's Croton Aqueduct. Various sources were proposed. The Croton River was already being used as the City of New York's water supply, and it did not have the capacity to serve the City of Brooklyn as well. The Bronx River was both inadequate and difficult to access. Wells in and near Brooklyn were inadequate both in quantity and quality. Natural lakes on Long Island were few and could not provide enough water. The only solution was to tap the many small streams on Long Island and conduct their water to Brooklyn to be lifted into an elevated reservoir.

The original design of the Ridgewood Reservoir as well as the final specifications for the Brooklyn Water Works system were designed by Brooklyn civil engineer Samuel McElroy. This original design called for three basins, but engineer James P. Kirkwood later altered the designs and instead built a double basin. The new double reservoir was built in Snediker's Cornfield on a hilltop near Evergreen Cemetery in what was once part of Ridgewood, Queens (this section of Queens is now part of Glendale) and was sealed by puddling with clay. The walls were faced with fieldstone and mortar. Ground was broken for the reservoir's construction on July 11, 1856 and the reservoir's water was initially raised on November 18, 1858.

In 1862, the water supply for the reservoir consisted of six dammed streams in what is now Queens and Nassau Counties: Jamaica Stream (Baisley Pond), Simonson's Stream, Clear Stream, Valley Stream, Pine's Stream, and Hempstead Stream (Hempstead Lake). This water was carried in a 12-mile-long masonry conduit, called the Ridgewood Aqueduct, to a pumping station at Atlantic Avenue and Chestnut Street. There, steam-powered pumps, each with a capacity of 14 million gallons (53,000 m3) per day, forced the water up through a reinforced tube into the high reservoir whence it was distributed. By 1868 the Ridgewood Reservoir held an average of 154.4 million gallons (584,000 m3) daily, enough to supply the City of Brooklyn for ten days at that time.

The Ridgewood Reservoir’s innovative use of driven wells was notable for the time; an 1886 Scientific American article states that the reservoir’s system of driven wells “has attracted widespread attention because of the originality and boldness of the plans and the perfect success attained.”

In subsequent decades the Brooklyn Water Works system was repeatedly expanded by adding wells and collection reservoirs, extending the conduit farther east, and adding pumps. The Ridgewood Reservoir's third basin was completed in 1891. Farmers in southern Queens County complained that Brooklyn's thirst was lowering the water table. Late in the century, the conduit was extended to a large pumping station in Massapequa, some 30 miles (48 km) away. Efforts to extend it farther were thwarted by legislation protecting the water of Suffolk County. Force Tube Avenue, Conduit Boulevard, and Sunrise Highway were built, in part, atop the water conduit or within its right of way, early in the 20th century.

Highland Park was created on land immediately surrounding Ridgewood Reservoir that was purchased by the City of Brooklyn in 1891 under the jurisdiction of the Highland Park Society. The park was constructed between 1901 and 1906 and included additional parcels purchased to the south and west.

In 1898, Brooklyn merged with the City of Greater New York, thus gaining access to the superior New York City water supply system. Ridgewood Reservoir was expensive to operate because of the need for pumping and was slowly made obsolete by expansion of New York City's Catskill and Delaware water systems. Ridgewood Reservoir became a backup reservoir in 1959 with the third basin being filled with water from the Catskill system. The reservoir was last used in a drought in the 1960s. During the 1970s the reservoir was the site of illegal swimming and a number of drownings. The reservoir was finally decommissioned and drained in 1989.

Some of the Nassau County pumping stations including the one at Milburn (now Baldwin) survived into the 21st century as ruins. Valley Stream State Park, Hempstead Lake State Park, and other South Shore lakes and parks were originally Brooklyn Water Works reservoirs.

In 2004, the reservoir was officially turned over to the Department of Parks for more extensive integration into Highland Park. 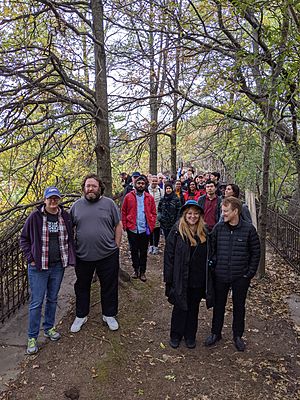 Since the Ridgewood Reservoir was decommissioned, it has naturally become reforested and has developed into a thriving wetland ecosystem. It currently contains a wide range of natural environments, including woodlands, swamp, standing water wetlands, coastal swamp forest, bog, and open grassy area. The reservoir is home to a wide range of flora and fauna, including 156 species of birds, 175 plant species, and numerous species of insects. The evolving fresh-water site has become an important nearby oasis on the Atlantic Flyway and is a common destination for birdwatchers. The reservoir’s distinct ecological setting has also made it a frequent destination for field trips and walking tours. Currently, the pond in the middle basin of the reservoir is being overgrown by invasive weeds that belong to the genus Phragmites. Left unchecked, the Phragmites would outcompete the reservoir’s natural plant species and fill in the pond. Community efforts to control the reservoir’s Phragmites population, via underwater weed-cutting and root removal, are ongoing.

In January 2019, the NYC Parks Department designated the Ridgewood Reservoir as a Critical Environmental Area, citing the reservoir's status as a "naturalized area that is unique within New York City and serves as an important ecological, historic, and public recreation resource."

All content from Kiddle encyclopedia articles (including the article images and facts) can be freely used under Attribution-ShareAlike license, unless stated otherwise. Cite this article:
Ridgewood Reservoir Facts for Kids. Kiddle Encyclopedia.