The rim rock crowned snake (Tantilla oolitica), named after the Miami Rim Rock land arrangement, is a non-venomous endangered species of snake belonging to the family Colubridae . The rim rock crowned snake is endemic to the United States throughout southern Florida. The specific name, oolitica, refers to the oolitic limestone area of Florida in which the species is found. It is common that all snakes that belong to the Genus Tantilla, are relatively small and usually do not exceed 20 cm (8 in). The species was added to the IUCN red list in 2007 as a result of loss in habitat and restricted range.

It is found only in Dade County and Monroe County of Florida and the Florida Keys, including Eastern Rock Rim of Miami. 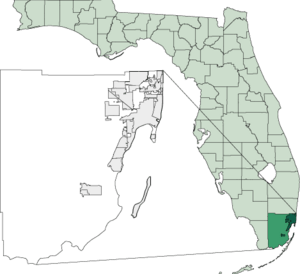 The rim rock crown snake is a relatively small species, the maximum recorded total length is 29 cm (11.5 in). The top of the head is black, with hues of tan to beige found on its back, and white ventrally. Their diet consist spiders, centipedes, worms, insects and its larva, and even scorpions.

The rim rock crowned snake tends to inhabit areas with rocky and sandy soils in pine flatwoods, and tropical hardwood hammocks. The snakes can less commonly be found inside crevasses of limestone, under foliage, and in suburban areas.

In 2007 the species was added to the IUCN red list, as a result of loss in habitat and restricted range. Due to Miami's ever growing city, fragmentation is the main threat to the rim rock crowned snake. Roughly 2% of the historical pine rocklands located on the Miami rock ridge still exist. Also the hardwood hammocks in Dade county, and the remainder of Florida have been diminished to about half of what it once was. Populations near the Keys also face major issues concerning habitat flooding from severe storms. Today the species is under the Florida endangered and threatened species rule [1]

All content from Kiddle encyclopedia articles (including the article images and facts) can be freely used under Attribution-ShareAlike license, unless stated otherwise. Cite this article:
Rim rock crown snake Facts for Kids. Kiddle Encyclopedia.