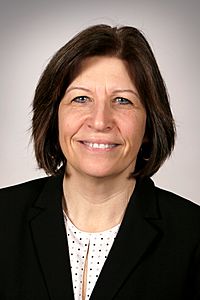 Rita Hart (born 1956) is an American politician from Iowa. She became the Iowa State Senator from the 49th District in 2013. Hart is a member of the United States' Democratic Party.

Hart is a lifelong farmer and 20-year educator.

In June 2018, Fred Hubbell said Hart would join the Democratic ticket as the candidate for lieutenant governor in the 2018 governor election.

Hart ran for a seat in the United States House of Representatives in 2020, but lost the election to Republican Mariannette Miller-Meeks by six votes.

All content from Kiddle encyclopedia articles (including the article images and facts) can be freely used under Attribution-ShareAlike license, unless stated otherwise. Cite this article:
Rita Hart Facts for Kids. Kiddle Encyclopedia.