The Iowa Senate is the upper house of the Iowa General Assembly, Iowa's legislature. There are 50 people in the Senate, one for each of 50 districts in Iowa. Each district has about 59,500 people in it. Each Senate district is composed of two House districts. The Senate meets at the Iowa State Capitol in Des Moines.

Unlike the Iowa House of Representatives, Senate members - called "senators"—have terms of four years. Half of the Senate is elected every two years, in even-numbered years. There are no term limits for the Senate. 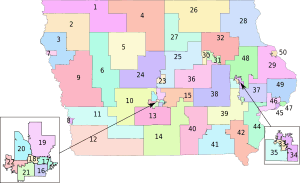 All content from Kiddle encyclopedia articles (including the article images and facts) can be freely used under Attribution-ShareAlike license, unless stated otherwise. Cite this article:
Iowa Senate Facts for Kids. Kiddle Encyclopedia.