The River Greta is a river in Cumbria, England. It is a tributary of the River Derwent and flows through the town of Keswick. "Greta" derives from the Old Norse "Griótá", meaning "stony stream". The name is in records dating from the early 13th century, and also appears in Latinised form, as "Gretagila", at the time of Magna Carta. 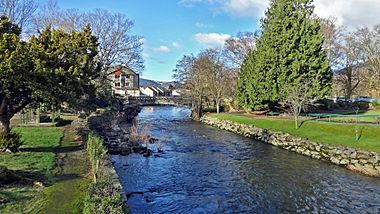 River Greta in Fitz Park, looking towards the town

The source of the river is near Threlkeld, at the confluence of the River Glenderamackin and St. John's Beck. From there, the river runs westward, roughly aligned with the former Cockermouth, Keswick and Penrith Railway between Keswick and Penrith. The river subsequently flows through Keswick before joining the Derwent just after the latter flows out of Derwentwater. The medieval bridge over the river in Keswick was unusual in having two arches; on the great coach road from Kendal to Cockermouth all but two of the other bridges (Troutbeck and Portinscale) crossed their rivers in a single span. The current Greta Bridge in Keswick is another two-arch structure, built in 1926.

The major tributaries of the Greta are Naddle Beck and Glenderaterra Beck.

All content from Kiddle encyclopedia articles (including the article images and facts) can be freely used under Attribution-ShareAlike license, unless stated otherwise. Cite this article:
River Greta, Cumbria Facts for Kids. Kiddle Encyclopedia.