River Song is a fictional character in the British science-fiction series Doctor Who. She is played mainly by Alex Kingston. River Song was first seen in the series as a future companion of the Doctor. The Doctor is an alien Time Lord who travels through time and space in his TARDIS. River Song is a time traveler herself. Because of this, her time spent with the Doctor does not happen in the same order his time with her does. The first time they met (in the series) is his first but her last time. In later episodes, River is a companion of the Doctor in his eleventh form (Matt Smith). River Song was created by Doctor Who writer Steven Moffat for the programme's fourth series in 2008. When moffat took over the job of executive producer from Russell T Davies, he started developing the character's background. He created adventures earlier in River's timeline. Alex Kingston went from being from a guest star to a recurring actor in the series. Other actresses have also played younger versions of the character. She has been an infant, a child and a young adult.

When the character was first seen, much about her was mystery. After the character's first time on the series, Davies said she was as "one of the most important characters" in the story. He said that she was "vital" to the Doctor's life. In series six (2011), Moffat's episodes showed more about the character. Born Melody Pond, River is the daughter of the Eleventh Doctor's companions Amy Pond (Karen Gillan) and Rory Williams (Arthur Darvill). Kingston had appeared with these characters several times in series five (2010). Because she was conceived in the TARDIS as it travelled through the space-time vortex, Melody is born with genetic traits and abilities much like to the Doctor's own race, the Time Lords. 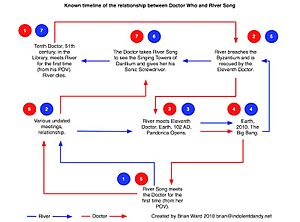 The order of appearances of River Song are not the same from her point of view as they are from the point of view of the Doctor and the viewers.

River Song first appears in the Doctor Who 2008 series two-episode story "Silence in the Library"/"Forest of the Dead". This story was written by Steven Moffat. Here, she meets up with the Tenth Doctor (David Tennant) in the 51st century. She tells him that she is someone he will come to trust completely. River, who wears a space suit, carries a diary that looks like the TARDIS. It is filled with her adventures. She is a professor of archaeology. The Doctor learns that he will trust her in the future when she whispers his real name into his ear. The adventure in the Library is River's last real-life meeting with the Doctor in her chronology. It is their first meeting in his. In the second of the two episodes she dies to save the people who were trapped in the Library's database, before the Doctor could do the same. The Doctor is then able to upload her consciousness into a computer. This allows her to live on in a virtual world created by the Library computer. He does this by using a sonic screwdriver that she was given by himself in his future (her past).

After Moffat took over from Davies as executive producer, River Song was in the 2010 series. At an earlier point in her timeline, in the two-episode story "The Time of Angels"/"Flesh and Stone", River meets the Eleventh Doctor (Matt Smith). She is more familiar to him and he is more familiar to her. At this point in her life, River is a doctor. She is not yet a professor. She leaves coordinates for the Doctor to find so that he may save her in the 51st century. With him she goes to learn about the crash of the spaceship Byzantium. She shows herself to be better at flying the TARDIS than he is. She tells the Doctor that she is imprisoned in the Stormcage Containment Facility for killing, in her words, "the best man I've ever known." An even earlier version of River helps the Doctor in series finale "The Pandorica Opens"/"The Big Bang". After Winston Churchill (Ian McNeice) talks to her while she is in prison, she takes the Doctor to 102 A.D. While River is travelling in the TARDIS on her own, it explodes with her inside. The Doctor, using an device that belonged River, is able to save her and teleport her out. She then helps him in closing the cracks in the universe. After the Doctor removes himself from all of history to close the cracks in the universe, River helps Amy Pond to remember the Doctor. This brings him back. She gives Amy her now-blank diary. At the end of the series finale, The Doctor asks her whether she is married. She says she is married, and answers yes to a question she pretends think is him asking her to marry him. She then tells to the Doctor that he will soon learn the truth about her, after which 'everything changes'.

In the first episodes of 2011 series, "The Impossible Astronaut"/"Day of the Moon", River, Rory and Amy (Karen Gillan are contacted by a future version of the Doctor. They are told to meet in the United States. This future version of the Doctor is killed by an person in a space suit. The Doctor's current version is there with them. In 1969, the present Doctor and company meet a little girl (Sydney Wade) who wears the space suit. River tells the Doctor it is a life support unit. The suit has been designed by the hypnotic alien race, Silence. The girl is later seen regenerating in New York City, 1970. In "A Good Man Goes to War," it is learned that River is Amy and Rory's daughter Melody. She was conceived in the TARDIS and has Time Lord DNA. Baby Melody is kidnaped by Madame Kovarian (Frances Barber) to become a weapon against the Doctor. "Let's Kill Hitler" shows that Melody was trained by the Silence to kill the Doctor. After regenerating in New York, Melody became Rory and Amy's childhood friend Mels (Maya Glace-Green) and grew up alongside them. When adult Mels (Nina Toussaint-White) is shot, she regenerates into her next form (Kingston) and kills the Doctor. When she learns she will one day become River Song, someone the Doctor trust, Melody chooses to resurrect the Doctor with her energy. This causes her to lose the ability. The Doctor learns that she is the person who kills him in his future. The Doctor gives her a blank TARDIS-shaped diary, and Melody - now River - begins to study archaeology. At the end of "Closing Time", on the day she receives her doctorate, the Silence and Kovarian recapture River. They, then, put her in the space suit to kill the Doctor as history showed. In the series finale "The Wedding of River Song", River stops herself from killing the Doctor. This created an alternate reality. The Doctor marries River. He gets her to return to the normal history by letting her know how he plans to fake his death. River goes to prison for his murder so no one knows he is not dead.

The series 6 DVD bonus episodes Night and the Doctor shows River in the episodes "First Night" and "Last Night". The Doctor tries to take River on a date shortly after she is put in prison. Their time in the TARDIS is interrupted by two future versions of River. All are wondering about the signs of "another woman" being aboard the TARDIS.. The Doctor is able get rid of the two future Rivers, but not before learning from his future self that one of them is shortly to die in the Library where he first met her.

At the same time as the 2010 series, Alex Kingston played River Song narrating the "Monster Files" on the BBC website. It is a documentary about Doctor Who monsters. This series had also (in 2008-9) been narrated by John Barrowman in character as Captain Jack Harkness.

For the role of River Song, they wanted to cast Kate Winslet. One of Winslet's first acting jobs was in the BBC1 teen drama Dark Season, written by Davies. The role of River Song went to Alex Kingston instead. She is known for starring in the popular US drama ER. On Kingston's casting, Davies said "I bloody love her!" Kingston had liked Doctor Who as a child. Kingston, when first cast, did not expect her role to be more than just the two episodes. She later learned that Moffat had always wanted for Song to come back for more episodes. Kingston likes getting to play an unusual action hero female role.

Talking about acting with Tennant and Catherine Tate (Donna Noble) in her 2008 episode, Kingston said, "We just clicked. I've done guest roles on other shows, but rarely have I felt such a warm bond." About working with Kingston, Catherine Tate said, "I'm a huge ER fan. When you hold people in awe, it's almost a disappointment when they come in and they're utterly normal. But Alex isn't disappointing at all. She's such a lovely person." David Tennant said, "Alex is terrific. When she's telling you stories about hanging out with George Clooney, you know she's pretty cool."

When asked about the Doctor Who dialogue, she said, "I'd work with a medicalconsultant on ER, who'd explain what we were saying, so I'd say it with a purpose and a truth. On Doctor Who, I've no idea what some of my lines mean!"

The character was first created to help the plot of "Silence in the Library" to make more sense. Moffat knew that the team of archaeologists would have to trust the Doctor, but the Doctor could not get them to understand how he had gotten into the closed library. Because of this, Moffat wanted for the Doctor to know one of the archaeologists but he thought that the idea was "dull". He chose to have one of them know him. When Kingston returned to the show, Moffat told her some details about her character's back-story. This was information that Smith, Gillan and Darvill did not learn until later. Kingston knows her character cannot be killed off because her death was seen in her first episode. Each episode she is in after that is earlier in her personal history.

All content from Kiddle encyclopedia articles (including the article images and facts) can be freely used under Attribution-ShareAlike license, unless stated otherwise. Cite this article:
River Song (Doctor Who) Facts for Kids. Kiddle Encyclopedia.