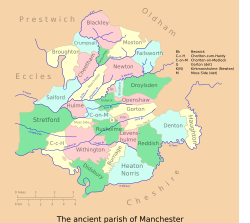 Map of the ancient parish of Manchester, showing the River Tib running through Manchester Township.

During the Roman period, the Tib marked the boundary of the vicus or settlement of Mamucium; the river continued to mark Manchester's boundary until medieval times, as well as providing drinking water. A notion concerning the Tib's name, coined by Geoffrey Ashworth in his book The Lost Rivers of Manchester, is that the river was given its name by homesick Roman soldiers after the River Tiber, but with the word shortened to reflect the size difference between the two rivers. Alternatively, the name may derive from the Celtic word for "watercourse".

All content from Kiddle encyclopedia articles (including the article images and facts) can be freely used under Attribution-ShareAlike license, unless stated otherwise. Cite this article:
River Tib Facts for Kids. Kiddle Encyclopedia.