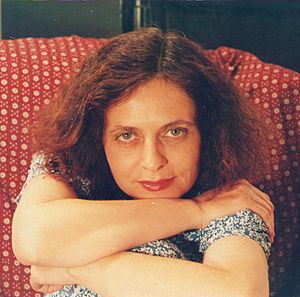 Rivka Keren was born as Katalin Friedländer in Debrecen, Hungary. She immigrated with her parents and small brother to Israel in 1957. She has been writing since childhood, first in Hungarian, later in Hebrew. Studied painting in Jerusalem and New York City, philosophy, literature and psychology in Bar Ilan University, graduated in Tel Aviv University (MA, clinical psychology).

Keren has worked as a librarian, art therapist and clinical psychologist. Exhibited her paintings in various countries. During these years, she had published books for children, adolescents, novels, short stories, translations and was included in numerous anthologies. Some of her books and short stories had been translated to German, English, Spanish, Russian, Hungarian, Braille (for the blind) and recorded on disks.

Keren is a member of PEN, ACUM, and IPA.

She is married with two children.

Rivka Keren published so far fourteen books and four additional books are due to be published soon. Her work is dealing mostly with subject matters such as destiny, memory, identity, the mystery of love and evil and the dualism of immigrants. Keren's writing is multi-layered and non-linear. The characters wander in a limbo between good and bad, love and hate, sanity and madness, while their state of mind meticulously analyzed. Their quests for belonging, roots and most of all truth and purpose, carry them to their goals through suffering and harsh experiences. Those of the novels that examine the characters against the black hole of the Holocaust were bestsellers and subject to much controversy among critics. In her writings, Rivka Keren, as second generation to Holocaust survivors, is representing the ongoing turmoil and conflict in the existence of immigrants, their pain and alienation but also their absorption and success. Her novels are a study of the human nature, the destructiveness of evil and revenge and the power of hope and love.

Some of the translated stories

All content from Kiddle encyclopedia articles (including the article images and facts) can be freely used under Attribution-ShareAlike license, unless stated otherwise. Cite this article:
Rivka Keren Facts for Kids. Kiddle Encyclopedia.