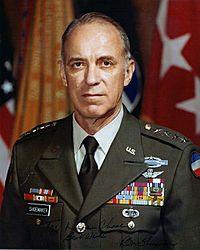 Robert Morin Shoemaker (February 18, 1924 – June 21, 2017) was an American military personnel. He was a U.S. Army general and former commander of the United States Army Forces Command (FORSCOM). He was also an inductee into the Aviation Hall of Fame. He was born in Almont, Michigan.

All content from Kiddle encyclopedia articles (including the article images and facts) can be freely used under Attribution-ShareAlike license, unless stated otherwise. Cite this article:
Robert M. Shoemaker Facts for Kids. Kiddle Encyclopedia.