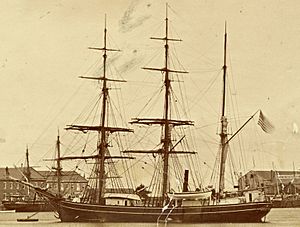 Search for the Jeannette

In May 1881, Lieutenant Berry became commander of USS Rodgers, a ship built for Arctic navigation. He was part of the second relief effort of the ill-fated Jeannette expedition. The ship left San Francisco in June and arrived at Petropavlovsk 33 days later, where the captain of the Russian corvette Streloch offered "any needed assistance" on behalf of his government in the search for clues of the missing ship.

Lt. Berry took on two Chukchis as hunters and dog drivers at Saint Lawrence Bay, and on 20 August, entered the Arctic Ocean. At Herald Island, Berry found out that the crew of the preceding ship, USRC Thomas Corwin, had already covered the island without success. Three days later Berry landed with a party at then still little explored Wrangel Island further to the west and was the first to survey the southern coast and part of the interior, proving that Wrangel was an island and not the southern edge of a polar land mass.

Berry left Wrangel Island on 13 September, and moved north and west until stopped by pack ice on the 18th. Returning to Wrangel, the search was continued choosing another course until the 27th. Again blocked by ice, Berry decided to turn south for winter quarters. The first week in October a party was left under Master Charles F. Putnam on Tiapka Island off Cape Serdtse-Kamen with provisions, supplies, and fuel for a year; as well as a boat, dogs, and sleds to explore the coast westward in search of the crews of Jeanette and the missing whalers.

On 8 October 1881 the ship returned to Saint Lawrence Bay in Chukotka, but bad weather prevented the transfer of a large part of her provisions and supplies to the shore. On 30 November, fire broke out in the hold. Through the day, stores were removed to ease the firefighting efforts, but at midnight, the fires still raged and USS Rodgers was abandoned. The burning ship drifted up the bay and early the next day her magazine exploded. A temporary shore camp sheltered the crew until the next day when they moved to the village of Noomamoo, seven miles (10 km) away. Later divided into four parties, most of the crew wintered there and in three nearby villages. As the crew adjusted to life ashore, Lieutenant Berry set out to inform Putnam's camp of the fire. Meanwhile, Master Putnam had learned of the disaster and had started for Saint Lawrence Bay with supplies for the relief of survivors. After reaching the bay, Putnam returned to his camp but lost his way in a blizzard and drifted out to sea on an ice floe. An unsuccessful, month-long search for him was conducted along the coast.

On 8 February 1882, a party under Lieutenant Berry —who had not yet learned of Putnam's loss—set out on another search along the coast for Jeanette's crew. On 24 March, they arrived at the Russian post at Nishne and learned of the landing of part of Jeanette's crew at the mouth of the Lena River the previous September. Berry and his party then returned home.

Rear Admiral Berry died in 1929 and was buried with full military honors at Arlington National Cemetery.

Berry Point, a headland in Wrangel Island, as well as Berry Peak, the highest point of the island, were named after him.

All content from Kiddle encyclopedia articles (including the article images and facts) can be freely used under Attribution-ShareAlike license, unless stated otherwise. Cite this article:
Robert Mallory Berry Facts for Kids. Kiddle Encyclopedia.