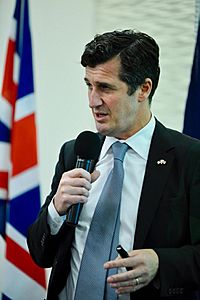 Robert Andrew Rowland (28 February 1966 – 23 January 2021) was a British politician and businessman. He was a member of the Brexit Party. He was a Member of the European Parliament (MEP) for South East England from 2019 until the United Kingdom's exit from the EU in 2020. Rowland was born in Bowdon, Greater Manchester.

Rowland drowned on 23 January 2021 while on vacation in the Bahamas in a scuba diving accident, aged 54.

All content from Kiddle encyclopedia articles (including the article images and facts) can be freely used under Attribution-ShareAlike license, unless stated otherwise. Cite this article:
Robert Rowland Facts for Kids. Kiddle Encyclopedia.