Rochester is a city in, and the county seat of, Fulton County, Indiana, United States. The population was 6,218 at the 2010 census.

Rochester was laid out in 1835. The founder Alexander Chamberlain named it for his former hometown of Rochester, New York. The Rochester post office was established in 1836.

The Potawatomi Trail of Death came though the town in 1838.

Rochester was incorporated as a city in 1853. 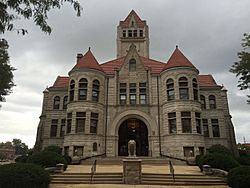 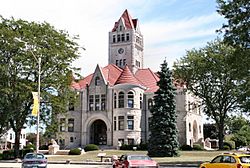 Located on the east side of Rochester, Lake Manitou is a popular place in the summer for boating and other water-related activities.

All content from Kiddle encyclopedia articles (including the article images and facts) can be freely used under Attribution-ShareAlike license, unless stated otherwise. Cite this article:
Rochester, Indiana Facts for Kids. Kiddle Encyclopedia.