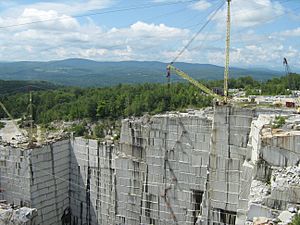 A granite quarry run by Rock of Ages 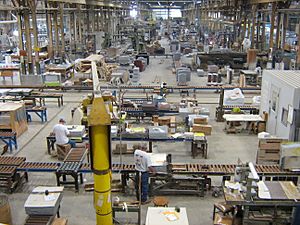 Rock of Ages Corporation is a company in Vermont. It mines granite, which it sells largely for use in memorials, though it also makes smaller products.

It was started in 1885, and has its headquarters in Graniteville, Vermont, which is close to Barre.

In October 2010, another mining company, Swenson Granite Company, said it would buy Rock of Ages for $39 million.

Rock of Ages runs the largest granite quarry in the world. It is about 600 feet (180 m) deep, and covers about 50 acres.

All content from Kiddle encyclopedia articles (including the article images and facts) can be freely used under Attribution-ShareAlike license, unless stated otherwise. Cite this article:
Rock of Ages Corporation Facts for Kids. Kiddle Encyclopedia.