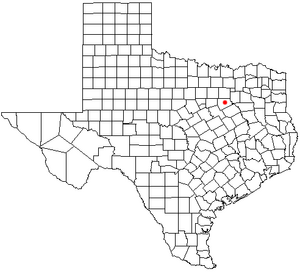 Location of Rockett in the state of Texas.

Rockett is an unincorporated community in Ellis County, Texas, United States. It is part of the Dallas–Fort Worth metroplex. Rockett is located on FM 813, approximately five miles northeast of Waxahachie.

Rockett was settled in 1846, making it one of the oldest settlements in Ellis County. Missourian Hans Smith and his family were among the first settlers in the area. They chose a site along Red Oak Creek, southeast of the present-day community. Other families followed.

Originally known as Liberty, the name was changed to Rockett in 1852 after local store owner John Rockett, who placed the first cotton gin in the area. The community continued to grow and a post office opened in 1894. It remained in operation until January 2, 1907. By 1933, Rockett had an estimated population of 150 and two businesses.

As of 2000, there were approximately 124 people living in the community. In recent years, the building of several new subdivisions has brought more residents to the area. Despite its rural surroundings, Rockett (and all of Ellis County) is considered part of the Dallas–Fort Worth–Arlington Metropolitan Statistical Area. 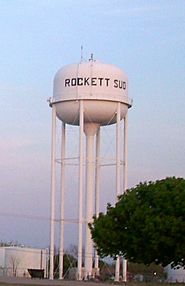 The Rockett Special Utility District (SUD) provides water services for the community of Rockett and surrounding rural areas in north central Ellis County as well as a very small portion of southern Dallas County. There are approximately 11,000 residents living in its service area.

It was established on January 29, 1965 as the Rockett Water Supply Corporation. The name was changed to the Rockett Special Utility District on November 21, 1989.

All content from Kiddle encyclopedia articles (including the article images and facts) can be freely used under Attribution-ShareAlike license, unless stated otherwise. Cite this article:
Rockett, Texas Facts for Kids. Kiddle Encyclopedia.