Rockingham is a historic house that was the home of John Berrien (1711–1772) and George Washington's final headquarters of the Revolutionary War. It is located at 84 Laurel Avenue, Franklin Township in Somerset County, New Jersey. The house was originally located on the hillside east of the Millstone River at Rocky Hill. It has been moved within southern Franklin Township several times, and is now closer to Kingston than to Rocky Hill. The residence is a featured part of the Millstone River Valley Scenic Byway. The oldest portion of the house was built as a two-room, two-story saltbox style house c. 1710; a kitchen and additional rooms were added on in the early 1760s, expanding with the Berrien family. The first reference to the house as "Rockingham" does not appear until a 1783 newspaper advertisement to sell the house, a name given most likely in honor of the Marquess of Rockingham.

It was added to the National Register of Historic Places on December 18, 1970 for its significance in military and social history. Additional documentation was approved on January 11, 2010, after the house was moved in 2001.

John Berrien was a surveyor and land agent from Long Island whose business brought him into the Millstone River valley in the 1730s. In 1735, he purchased the small house that overlooked the river. Berrien eventually became a judge, first in Somerset County before eventually being named to the Supreme Court of New Jersey. His first wife, Mary Leonard of Perth Amboy died in 1758 without bearing children; the next year, he married Margaret Eaton, whose father founded Eatontown, New Jersey. Together John and Margaret had six children, four boys and two girls. John Berrien drowned in the Millstone River in 1772, leaving his estate in the hands of his wife. He is buried in Princeton Cemetery. 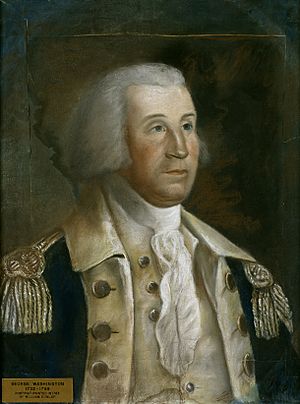 General George Washington stayed at Rockingham from August 23, 1783 to November 10, 1783. He was invited to the area by Congress, who were headquartered in Nassau Hall in Princeton while awaiting the news of the signing of the Treaty of Paris to officially end the Revolutionary War. Washington was accompanied by three aides-de-camp, a troop of between twelve and twenty-four life guards, his servants and, until early October, his wife Martha Washington. He spent his time at Rockingham entertaining Congress and other local figures until word of the end of the War reached him on October 31. On November 2, Washington composed his Farewell Orders to the Armies of the United States at Rockingham, a document dismissing his troops and announcing his retirement from the Army.

In 1802, Margaret Berrien sold the house to Frederick Cruser, who continued the expansion of the house. Storage space and servants sleeping quarters were added to the kitchen wing, a second-story balcony added to the front of the house, and the roofline raised to accommodate a third-story attic. The Cruser family occupied Rockingham until 1841. The house changed hands many times until the 1890s when the property was bought by the Rocky Hill Quarry Company.

The first move of the house was in 1897 to remove it from the Rocky Hill Quarry Company property in Rocky Hill. Kate McFarlane and Josephine Swann helped create the Washington Headquarters Association of Rocky Hill, which raised the money to purchase the structure and move it away from the quarry. In August 1897, the house was opened to the public. In 1935, ownership was turned over to the state of New Jersey.

By 1956, the quarry had expanded and the house again was too close to active quarrying. Rockingham was moved a half mile eastward along County Route 518.

The house made its final move in 2001. It now sits on a 27-acre (110,000 m2) lot on Kingston-Rocky Hill Road, adjacent to the Delaware and Raritan Canal, on the outskirts of Kingston. The site reopened to the public in 2004 and is open year-round. 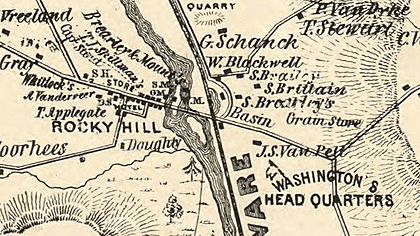 Rockingham has been owned by many individuals and moved three times since it was built:

All content from Kiddle encyclopedia articles (including the article images and facts) can be freely used under Attribution-ShareAlike license, unless stated otherwise. Cite this article:
Rockingham (house) Facts for Kids. Kiddle Encyclopedia.