Rolando is a neighborhood of the Mid-City region of San Diego, California. Rolando is mostly residential with the exception of El Cajon Boulevard, which features the Campus Plaza shopping center. Rolando is divided by University Avenue into two sections: Rolando Village to the north, and Rolando Park to the south.

Rolando Village's borders are defined by College Avenue to the West, El Cajon Boulevard to the North, and University Avenue to the South. The eastern border with La Mesa is uneven, and is defined by several residential streets which lie between 67th and 73rd streets.

Rolando Park's borders are defined by College Avenue to the West, University Avenue to the north, the 94 freeway to the south, and the City of La Mesa boundary to the east. 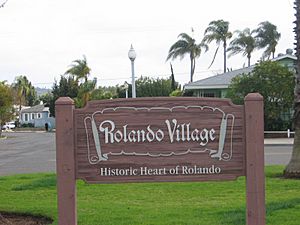 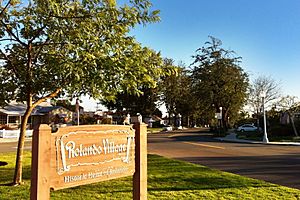 All content from Kiddle encyclopedia articles (including the article images and facts) can be freely used under Attribution-ShareAlike license, unless stated otherwise. Cite this article:
Rolando, San Diego Facts for Kids. Kiddle Encyclopedia.