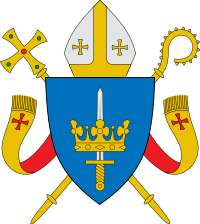 The Roman Catholic Diocese of Stockholm (Latin: Dioecesis Holmiensis; Swedish: Stockholms katolska stift) is a Roman Catholic ecclesiastical territory in Sweden. The seat is in Stockholm. The diocese is the only Roman Catholic one in Sweden since the Protestant Reformation back in the 16th century.

In current form, the diocese has been around since 1953.

All content from Kiddle encyclopedia articles (including the article images and facts) can be freely used under Attribution-ShareAlike license, unless stated otherwise. Cite this article:
Roman Catholic Diocese of Stockholm Facts for Kids. Kiddle Encyclopedia.