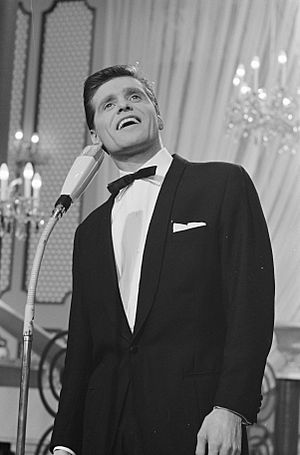 Ronnie Carroll (born Ronald Cleghorn, 18 August 1934 – 13 April 2015) was a Northern Irish singer and entertainer. Carroll was born in Roslyn Street, Belfast, Northern Ireland. He stood in the Haltemprice and Howden by-election, 2008 as a candidate for Make Politicians History and received 29 votes despite announcing that he was trying to enter the record books by receiving no votes.

He lived in Hampstead, London. Carroll died aged 80 on 13 April 2015 from a short-illness.

All content from Kiddle encyclopedia articles (including the article images and facts) can be freely used under Attribution-ShareAlike license, unless stated otherwise. Cite this article:
Ronnie Carroll Facts for Kids. Kiddle Encyclopedia.