The Rose Garden neighborhood in San Jose, California, is an old historic residential area with famous architecturally designed homes including one designed by Frank Lloyd Wright. The beautiful old homes date back to the 1800s, with limited building through the 1940s until the neighborhood was established. The single family homes are large spacious homes immaculately landscaped. The neighborhood boasts a serene environment, with local residents walking, jogging, riding bikes, and a friendly atmosphere for walking dogs. The neighbors are friendly and tight-knit, with an environment of safety with a strong daily police presence and a strong neighborhood watch program. New residents are warmly welcomed. The main downtown area runs between Bill's Cafe, a local haunt located on the Alameda ending at Whole Foods Supermarket. Therefore, the business presence is small. Centrally located near the City of Santa Clara and highways 101, 880, 17, 280, and the San Jose Airport.

Located west of Sunol-Midtown, north of Burbank, northeast of Winchester, and east of Cory neighborhood, and southeast of the City of Santa Clara, the Rose Garden can be considered either the easternmost neighborhood of West San Jose, or the westernmost of the central neighborhoods, although being in City Council District 6 and San Jose Unified School District politically ties the area with central San Jose. The basic boundaries are Interstate 880 to the northwest, the Alameda (SR 82) to the northeast, and Forest Avenue to the south, although there are variations. The neighborhood surrounds and is named for the San Jose Municipal Rose Garden, a 5½ acre (22,000 m²) park with thousands of rose bushes. The Rose Garden is served by the zip code 95126.

The Rose Garden (sometimes spelled "Rosegarden" is of one of San Jose's oldest neighborhoods outside of the 18th and 19th century downtown core around the Pueblo de San José de Guadalupe. Several existing Victorian houses in the neighborhood date from the 1860s and 1870s, especially along Magnolia Street, Hester Street, and Hedding Street.

One of the oldest subdivisions of San Jose is the 1877 Chapman & Davis tract, which spans roughly 3x8 city blocks lying to the west of the San Jose and Santa Clara Railroad along The Alameda. This was the first interurban railroad in California when it opened with horsecars in 1868, the second electric streetcar line in California (after one in San Diego), and the first interurban electric streetcar in the West when it reopened in 1888 with an underground third rail. It was converted to an overhead trolley in 1889. Each residential lot was originally one-half acre, but most have been subdivided further since. [Interstate 880] now roughly bisects this subdivision just north of Davis street. 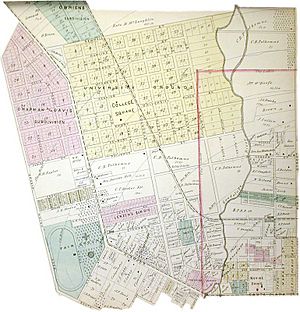 In the late 19th and early 20th centuries, The Alameda attracted many wealthy residents who built mansions along it. The Dunne mansion on the corner of Emory Street, built in the 1890s, may be the oldest building on the street.

In 1927, what is now the San Jose Municipal Rose Garden and its immediate surroundings were primarily pear and prune orchards, many owned by Food Machinery Corporation (FMC). The area was also home to farm houses and a few mansions. In that year, the City purchased an 11-acre (45,000 m²) prune garden and converted part of it into the Municipal Rose Garden. In 1937, John Crummey, the chairman of FMC, subdivided his 25-acre (100,000 m²) pear orchard into residential lots sold for $5,00 each. This initial development established the core of the neighborhood called Rose Park.

The neighborhood has preserved its residential housing. The original architecture of the 1920s and 1930s borrowed bits from the English Cotswold Cottage, Norman and Tudor design. Many of the original bungalows have been extensively remodeled or torn down and replaced with newer architectural styles. Almost all of the homes feature detached garages in the back of the property. This allows the front yards to feature large green spaces with a small long driveway to the back for the garage. The neighborhood is popular with walkers and joggers as the sidewalks are tree lined and bordered with large front yards.

The Rose Garden Area is a catch name for the many neighborhoods in the area, including Rose Garden, College Park, Garden Alameda, and Shasta Hanchett.

All content from Kiddle encyclopedia articles (including the article images and facts) can be freely used under Attribution-ShareAlike license, unless stated otherwise. Cite this article:
Rose Garden, San Jose, California Facts for Kids. Kiddle Encyclopedia.