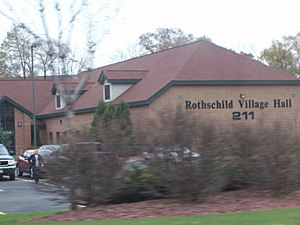 Rothschild is a village in Marathon County, Wisconsin, United States. It is part of the Wausau, Wisconsin Metropolitan Statistical Area. The population was 5,269 at the 2010 census. Rothschild is the northern terminus of Interstate 39, which starts in Normal, Illinois.

There were 2,199 households, of which 28.2% had children under the age of 18 living with them, 55.2% were married couples living together, 7.3% had a female householder with no husband present, 4.2% had a male householder with no wife present, and 33.4% were non-families. 27.8% of all households were made up of individuals, and 10.3% had someone living alone who was 65 years of age or older. The average household size was 2.38 and the average family size was 2.90.

The library in Rothschild opened its doors in 1949 when the Rothschild Homemakers group worked with the county librarian to establish a branch library. First located in a small cloak room in the village hall, it soon moved upstairs to a larger area.

By 1998, the Village of Rothschild needed more office space and the library was in need of expansion. This led to the construction of a new library/village hall complex completed in March 1999. The Schofield and Rothschild Branch Libraries were merged to form a larger branch library that had more open hours and a larger collection.

Wausau Homes Inc and Wausau Tile have their headquarters in Rothschild.

One of the larger employers in Rothschild is the Domtar Paper Mill. The mill was originally built between 1909 and 1910 by a group of local lumber barons. The mill produced its first reel of paper in 1910 and was incorporated under the name Marathon Paper Mills. At that time, the area that was to become Rothschild was still considered the Town of Weston. However, the company built and maintained several homes, a community hall, boarding house and general store. As the mill town grew around the paper mill, the area soon became incorporated as the village of Rothschild.

At its heyday in the early 1970s, the mill employed over 1,000 workers, operating four paper machines. Today, only one machine remains in operation.

All content from Kiddle encyclopedia articles (including the article images and facts) can be freely used under Attribution-ShareAlike license, unless stated otherwise. Cite this article:
Rothschild, Wisconsin Facts for Kids. Kiddle Encyclopedia.