The Rotorua Caldera, a large rhyolitic caldera, is one of several large volcanoes located in the Taupo Volcanic Zone on the North Island of New Zealand. The caldera's last major eruption, about 240,000 years ago, had a Volcanic Explosivity Index of 7. At this time, the Mamaku ignimbrite, covering about 4,000 km2 (1,500 sq mi), was deposited. After the eruption, the magma chamber underneath the volcano collapsed. The circular depression left behind is the current caldera, about 22 km (14 mi) in diameter and now occupied by Lake Rotorua. Mokoia Island, close to the centre of the lake, is a rhyolite dome. There are other domes like Hinemoa Point, Ngongotahā, Pohaturoa and Pukeroa. The most recent magmatic eruption occurred less than 25,000 years ago, creating some of the smaller lava domes. The major regional settlement of Rotorua is located in the caldera. There is geothermal activity in the town of Rotorua. 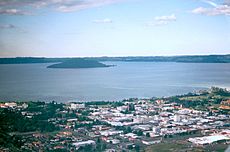 All content from Kiddle encyclopedia articles (including the article images and facts) can be freely used under Attribution-ShareAlike license, unless stated otherwise. Cite this article:
Rotorua Caldera Facts for Kids. Kiddle Encyclopedia.